GiReviews Presents: What is the strongest gi for Brazilian Jiu-Jitsu (BJJ)?

GiReviews Presents: What is the strongest gi for Brazilian Jiu-Jitsu (BJJ)?

What is the most durable / toughest / strongest gi for Brazilian Jiu-Jitsu (BJJ)?

At first glance, this is a silly question.  This is because the strongest Brazilian Jiu-Jitsu gi is often times not a BJJ gi at all.  It’s a judogi.

While they may look alike, there are some significant differences between Judo gis and BJJ gis.  Typically, people don’t wear a Brazilian Jiu-Jitsu gi in USA for judo, or vice versa.  In official competitions, you must wear the appropriate gi for that type of competition.

The nature of Judo and Brazilian Jiu-Jitsu is similar, but different.  Although both are jacketed grappling styles, the sport is opposite.  Judo is primarily concerned with throwing and standup grappling, whereas BJJ is essentially focused on grappling on the ground.  Therefore, the gis are constructed to meet the needs of their respective fighter.

The Differences between judo gis and BJJ gis:

With this trend, we don’t see as much emphasis on heavyweight gis any more.  How will we define what we’re talking about?

We’re discussing gis above a single weave, typically a double weave or above.  We looked at the ones that your opponent can't grip, that make you sweat buckets when you wear them, heck.. we tried to find the ones that you can't even grip yourself!

Without further ado, here is our list of the heaviest, most ungrippable and the best Jiu Jitsu Gi in the market right now. Note that some on the list are actually judo gis.

You'd have a difficult time finding something heavier than the 1,000gsm (grams/square meter) Keiko Gold Weave Kimono. The thickness of this 100% double weave cotton, IBJJF approved gi makes it near impossible to grip. 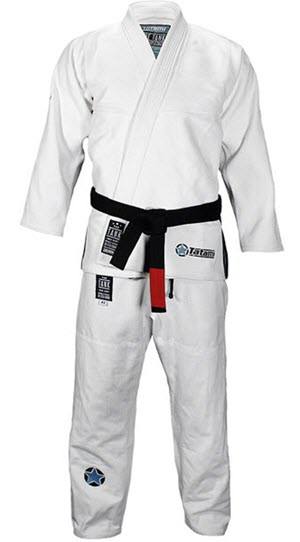 Tatami The Tank Gi is possibly the most talked-about, often-recommended, heavyweight gi right now. At 950gsm, you will probably have retired from jiu jitsu long before this gi gives up. Its design is inspired by the lighter, more popular Estilo range.

Grab the Best Deals for Tatami the Tank at MMA Overload

This double weave gi is the heaviest BJJ gi that Japan has manufactured. It is made of poly/cotton material that weighs in at 890gsm.

Grab the Best Deals for Ronin Imperial Kimono at Amazon

This is KuSakura's first exported judogi. At 890 gsm, it is also the brand's heaviest. This gi is made of 100% cotton.

Check Out the Latest BJJ Gis at MMA Overload

Check Out the Latest Judo Gis at Elite Sports

We can't complete this list without an HCK entry. Even though it is single weave, the HCK Competition Single BJJ gi weighs in at 740 gsm, and is the heaviest that is listed in their store.

Mention must be made, that even the heavy double weave gis won’t always last longer than lightweight gis.  First, they have to be washed more often and some people resort to bleaching them.  Also, the weave is much more dense and the quality of the fabric may not be as high as some lightweight gis, causing them to wear quickly.  While lighter, some ripstop gis can actually be more durable and easier to wash.

Now, this begs the question, if I want the strongest lightweight gi, what gis should I consider?  Do you have any suggestions?  Post them in the comments below.