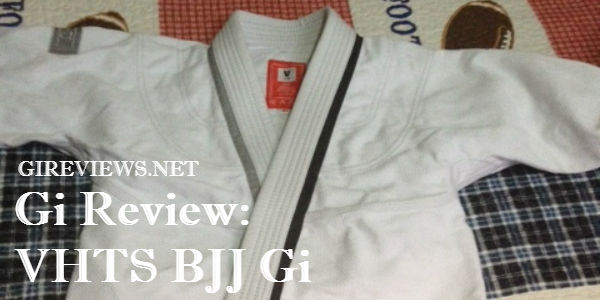 VHTS is a great gi overall, great price and excellent customer service. It’s a small brand (still) with great potential for growth. If it grows with all the perks, quirkiness, quality and customer service it has today, I can definitely see it becoming way mainstream and competing with the big dogs. 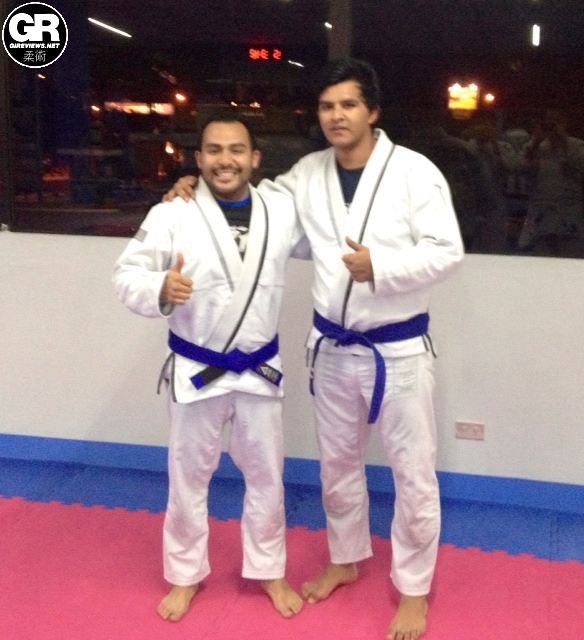 I’ve been lucky enough to win some contests and win some gis (that’s how I became friends with Brendan) but always wanted to buy my own. I had been looking for a Gi for some time now and decided I wanted a white gi, 550gsm (strong heavy jacket) and that had an awesome look to it.

After searching the web and reading reviews I came upon a review of the VHTS gi (Very Hard To Submit) when I saw it I fell in love, the black/grey piping along the collar of the gi is awesome. So I started to do my research and spoke to the company, to my surprise the owner of the brand (Gi Tak) was the one who answered me.

I’m a horrible shopper so I ask every question possible (in different emails mind you) and the owner responded to each of them very happily and very promptly (taking up to a couple of hours after I sent my emails, even on the weekends). This incredible customer service really caught my attention, which mixed with the Cool looking gi made me want to buy it. 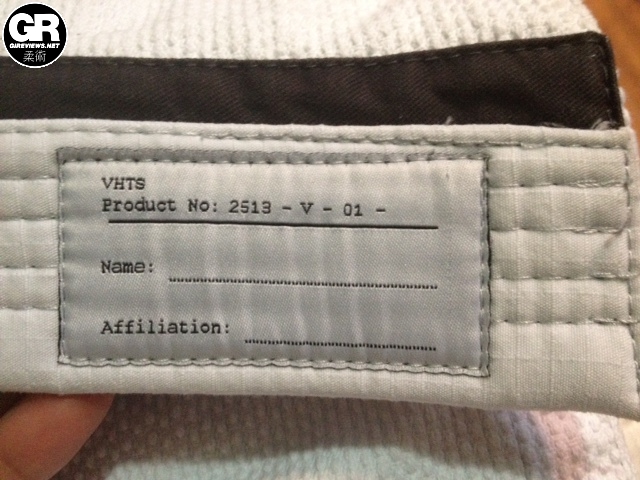 The Gis is a 550gsm jacket with a ripstop cotton pants with pearl weave crotch. The jacket is heavy (although not super heavy) and feels really tight (the weave) I would compare it to my Origin 550comp 12. The pants are the nicest, comfiest pants I own! I will repeat that THE VHTS G1 PANTS ARE THE NICEST, COMFIEST PANTS I OWN. They are super light (which at first I didn’t like) but when I tried them on WOW. The one thing I would critique is the fact that they don’t have reinforcements on the knees although it has a pearlweave crotch.

The other thing about the Gi that I found nice is that it DID NOT SHRINK AN INCH! I was worried at first (because Gis always shrink) but this one truly lives up to its name. I’ve had it for a couple of months now and everything is up to par. 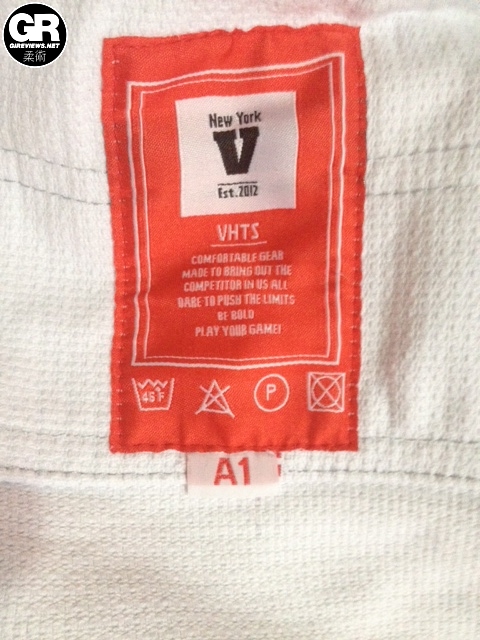 One thing interesting about this gi is the color, I know it’s white but it’s a different white than I’m used to (I have Origin, Gameness and Ronin Brand Gis) I’m not sure you’ll be able to see it in the pictures but the Gi has almost a grey tint to it. To me it looks awesome.

The other thing is that this is a quirky gi, somewhat minimalistic but it has enough details to make you quirky, what do I mean? Well in the pants there’s a patch with the following sayings: 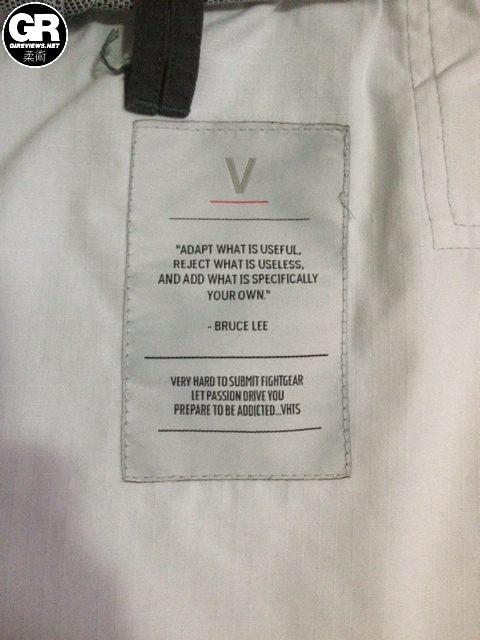 “ADAPT WHAT IS USEFUL, REJECT WHAT IS USELESS AND ADD WHAT IS SPECIFICALLY YOUR OWN” BRUCE LEE 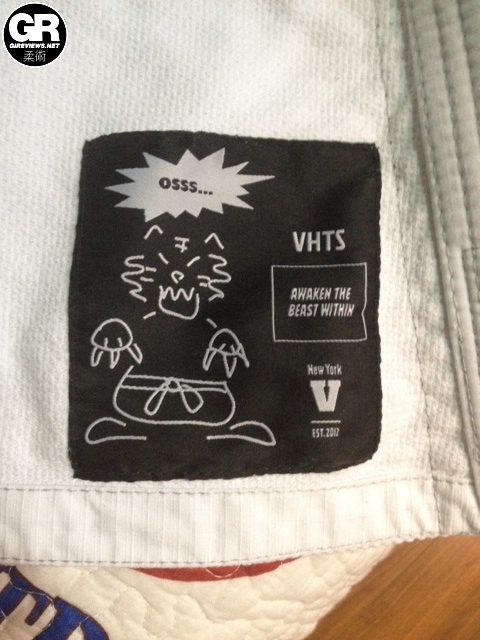 What else you may ask, the side of the pants has a small patch almost like a cover-up for the side vents with a happy face (or more so a inexpressive little black face). Another cool thing is the detail in the collar. In the bottom part of the collar there is a “tag” sewn own which reads NAME___ AFILIATION___ what is this for?

Well you can put your name and affiliation on this tag or patch, instead of writing directly on the collar. To me it's super cool and you can write your nickname or whatever you want on there. Continuing with the quirkiness is the inside patch. Instead of just saying A0 or whatever it says

VHTS COMFORTABLE GEAR MADE TO BRING OUT THE COMPETITION IN US ALL, DARE TO PUSH THE LIMITS BE BOLD PLAY YOUR GAME

The last thing is the inside patch (only for you to know and see) it has a “MONSTER” drawing with his belt on and it’s screaming OSS Awaken the beast within.

The collar has a black piping on one side and grey piping on the other side (it looks super classy) I almost feel like it’s a tux. Other than that a really minimalistic look. As you can see little details that make this gi superb in my opinion. 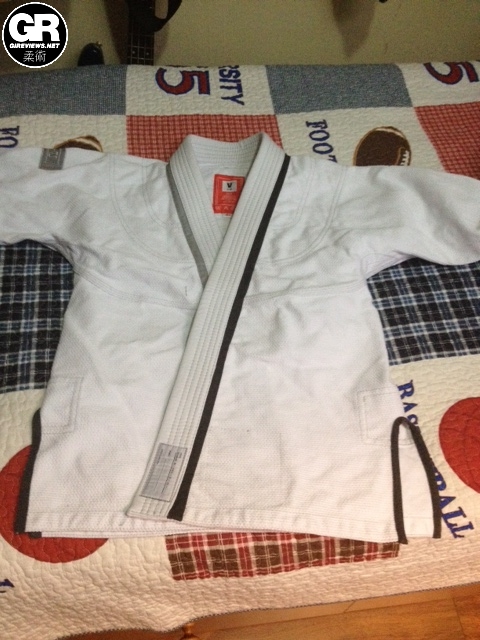 As I said previously the jacket is 550gsm, the sleeves are just right for me. The length of the jacket from collar to skirt is shorter than other gis, it really depends on your build. It stays tucked in right behind the belt but for some it may be short and for others just right (in my case). The collar is super thick (a little too thick maybe) and the sleeves have a little bit of a bigger opening perfect for those “Ezekiel chokes” 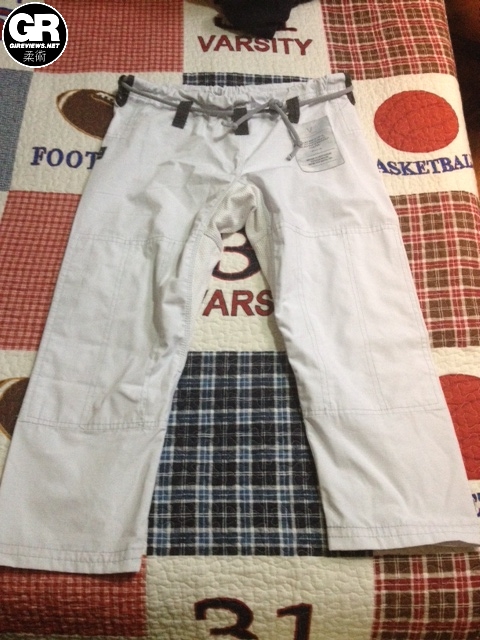 I won’t say it again but… these are the nicest and comfiest pants around. I normally like really thick pants that can take a beating and have great knee reinforcements, this pants are the opposite. They are lightweight, thin and do not have reinforcements (a small extra layer of ripstop), I believe they are more “competition” oriented although they are really comfortable, they just feel great I’ve used them to jog as well (that is how comfortable they are). 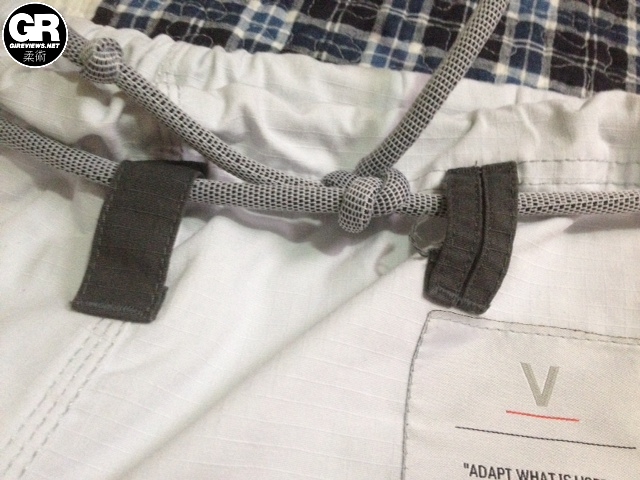 They are made of ripstop and have a pearl weave crotch they have 6 belt loops in pairs (two placed together on each side and two placed together in the middle). The drawstring is actually quite interesting it´s neither a flat string nor a stretchy string it’s a spongy string really cool material and it stays super tied up. 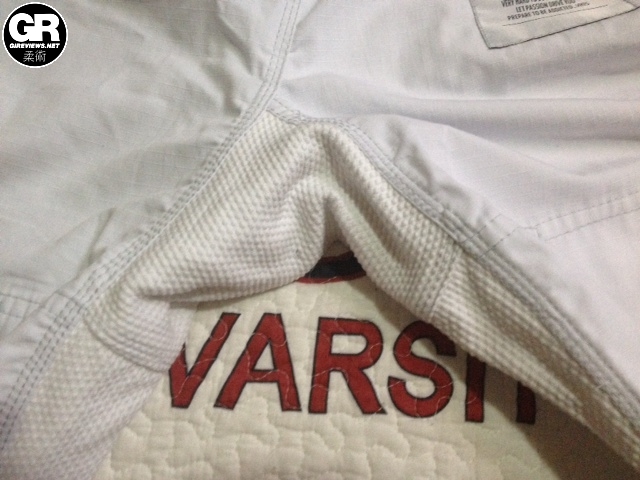 When I first tried on the gi and saw that it had a shorter skirt I thought it would be coming out of the gi every so often, it didn’t, the skirt width is great so it really hugs your body which makes the lapels difficult to come out of your belt when you’re rolling.

Like I said the pants feel so great that rolling is another experience because you barely feel them. I believe for hard training they will not be the best since they are ripstop and possibly will fray and not protect your knees (due to the lack of reinforcements) but I would still recommend for daily training (hey that’s what I’ve been doing) 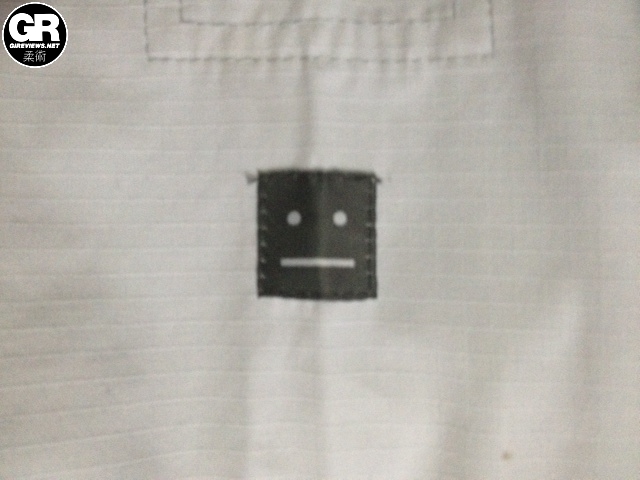 The gi is not perfect, few things in life are, but by far is one of my favorite gis to use to train and just to own. When I first reached out to Brendan about doing a review (my first one) I did it because it was my first purchase and it was great!

I had an incredible customer shopping experience; got a great price for a great quality gi and I took a chance on a small company which paid off. Like I said I didn’t know what to expect of a small company but they really made me feel special (with the customer service) and now I feel elite having one of their gis.

As I said at the beginning, my training partner/instructor when he saw the gi he loved it and started asking me about the gi and how much did it cost and where did I get it and so on and so for, I made the hookup with VHTS and he bought one as well and he loves it just the same. The fact that he saw it and wanted to buy it (and although he has seen other gis I own) made me realize that this gi was special and it caught someone’s eyes.

Disclosure: I bought the Gi after searching relentlessly for a budget white 550gsm gi that looked awesome. I didn’t know of the brand until I saw a review of it and after trading numerous emails with the owner (Gi Tak) the customer service was so amazing that I had to take a chance on the Gi and purchased it online, my instructor after seeing it fell in love and he in part bought one for himself.