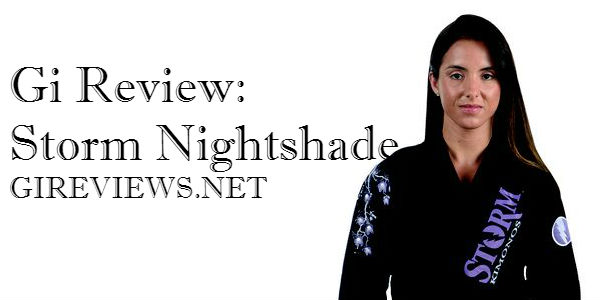 Storm is a fairly well known brand with a reputation for high quality gis. The Nightshade is one of three women’s cut gis by Storm, all of which have been designed with input from Angelica Galvao. It features many of the key design aspects that make all of Storm’s gis so well known, in a well cut women’s gi with feminine style and a moderate amount of ‘bling’.

The other women’s gis are a white version with magenta flowers called the Sakura, and as a black gi version of the Sakura, called the Flor which is a new addition to the Storm women’s collection.  The sizing chart(s) are honestly the most helpful ones I have ever used especially in combination with the ‘highly pre-shrunk’ component of the design.

Check out the gi collection by Storm Kimonos at Amazon

Here are the specifics from Storm:

There were a couple of things that first caught my eye about this gi, and to be honest I had my doubts.  Half of the description seemed as though they were trying to make the gi sound a lot better and fancier than it actually would be and I didn’t think any of the details would hold up even though I knew Storm has a reputation for high quality.  I also had significant doubts about the ‘bling’, as I had a ridiculous number of requirements for a women’s gi and “no overly feminine bling” was definitely one of them. Even more concerning was that the decoration on the pants is directly over the knee: one of the most susceptible areas to wear and tear.

Check out these women's gis from Storm Kimonos

The sizing chart really helped convince me that this was the gi for me. The sizing chart gives you a slew of measurements that are actually useful in sizing yourself in addition to a regular height-weight chart. As I’m just shy of 5’5” and about 155lbs with a ridiculously long torso, hilariously petite legs and stupidly large boobs, so obviously I was very nervous about sizing.

I measured myself with an alterations tape measure and compared it to the measurements given. I realized I would fit perfectly into an F3 without question (even if it shrunk an inch in every direction). Needless to say when I saw a ridiculously good sale on this gi on mmawarehouse.com, I snatched up an F3.

It fit perfectly straight out of the box, and wore it once without washing it, as it was pretty comfy. The sleeves were about a half-inch longer than I really liked and decided that I would take a small risk and shrink the top just a little. I washed the gi in hot water and dried it on medium/cool. The sleeves shrunk to hit me exactly at the wrist (about the half-inch I was hoping for) and the rest of the top was unchanged. I guess they were pretty spot on with “Highly Pre-shrunk”! 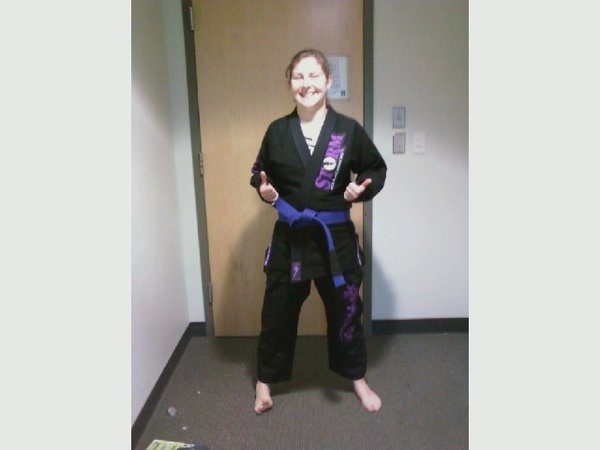 Like all Storm gis, the Nightshade has sleeves at 45 degrees from the shoulders instead of 90 degrees. I think this is a big factor in how well the top fits as the shoulders are a much better fit than other women’s gis I’ve tried. Like most women’s cuts its narrower at the shoulders and wider at the hips to accommodate a range of curvier shapes.

I had originally thought the amount of ‘bling’ on this gi was too much compared to my thought that Storm Gis usually only have a logo on the back of one calf and one sleeve, with a patch along the collar. The embroidered flowers on the right shoulder and left knee, as well as Storm Kimonos in script lettering on the back of the skirt, is in addition what is normally there. Comparatively, it’s moderately ‘blingy’ for a women’s gi.

The dimensions of the jacket haven’t changed from the sizing chart, except the sleeves shrunk about a half inch in length after I purposefully I shrunk them. The sleeves are a nice fit, they are tapered just enough to have a l well fitting opening at the wrist that’s not exceptionally wide.

The length of the skirt on the jacket is perfect, it hits right at the thigh like it’s supposed to. The collar really hasn’t warped at all (just like the claim), and it doesn’t open up and pull itself out of your belt. As for the rest of the claims about the top I’m honestly impressed they were all completely true! It really is ultra comfy even for someone with sensitive skin like me!

The coolest claim to hold up was that it’s anti-odor; I’ve worn it rolling with some sweaty dudes who make my gi/gear smell like death and this is the only thing I own that hasn’t come away from a roll with them smelling like serious funk. Even after a few days of festering in the laundry basket before I throw it in the wash it still never smells as terrible like my other gis and gear especially after working with the worst offenders.

You can’t choke your self on your own collar and its softer and flexible than you’d expect for the thickness however it’s still stiff enough to make it reasonably difficult to grip.

I usually don’t like ripstop pants but these are nice. They are a little short for the other ladies I’ve met with this gi, but I have petite legs for my height and they fit perfectly. They aren’t huge in the crotch either; they fit more like low-rise jeans and sit near your hips. The most impressive thing I have noticed about the pants is that when you start to move and flex the pants slide up your thighs instead of pulling down off your butt like most pants.

Shop for awesome deals on ripstop gis at Amazon

I’ve had this gi for about 5 months now, and after 40 something wash and dry cycles (on cold and low) absolutely nothing has faded- the gi is still blacker than night, the purple is still intense and the patch hasn’t bleed or faded at all.  I was a little worried about the embroidery on the knee of rip stop pants, as it weakens an area that’s already highly susceptible to wear and tear however, its held up exceptionally well. None of the embroidery (including the knee) has had stray threads or become loose and misshapen.

Overall this is hands down the best women’s gi I have ever experienced. It’s a high quality gi, that’s cut to fit real women. I am honestly impressed with this gi, and the more I wear it the more impressive it is to me. Absolutely nothing on the gi has shown any wear or tear, and all of the claims have continued to ring true under pretty hard scrutiny. I would honestly recommend this gi to any woman looking for a high quality gi for a reasonable price (most places online you can find it for $179).