Roll Jiu Jitsu is a BJJ apparel brand out of Ireland. They contacted us about doing a review and we are super glad we got our hands on their stuff. Since I recently moved to Wisconsin the delivery of sweatshirts in their care package was extremely welcome.

We got Two sweatshirts, a t-shirt, some stickers and a patch, seen below.

My favorite piece of apparel I was sent was their dark-gray crew neck sweat shirt. I have a ton of BJJ inspired hoodies so a sweatshirt was a welcome change. The first thing that pops out at you is the ROLL logo. If you're familiar with Obey you'd recognize the style of the typography as it clearly gets its inspiration from current street wear. It's nice seeing clean and crisp logos being used in BJJ.

I've never had a problem with people getting inspiration from companies outside of BJJ and bringing it to our art, because frankly, I don't Obey anyway. I roll. The sweatshirt is very comfortable and when you think of a sweatshirt in your mind, this is probably what you're thinking of. I'm very much excited for winter/fall here in ‘Sconi now.

I'm not as big of a fan of their slap and bump design, as Mickey Mouse hands have never been my thing, but it's nice seeing them doing something that incorporates a reference to what we actually do before we roll, and it's different than other BJJ brands. The sweatshirt is the exact same type as their first offering, equally as soft and comfortable. 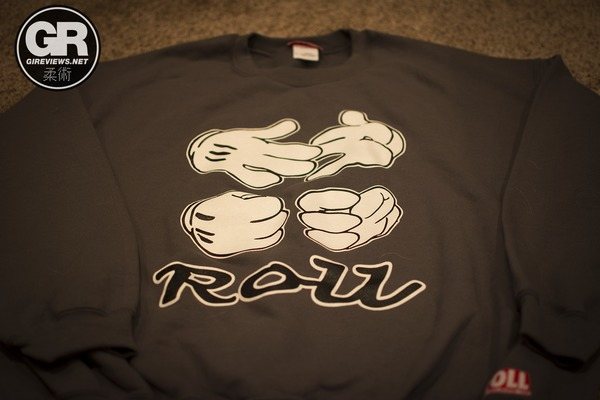 Rockin' the same logo as the first sweatshirt is their T-shirt offering. This isn't one of those ultra soft t's that's cut to the body, it's as standard of a t-shirt as you'll get, but it feels quite durable. I'd be reluctant to wear most of my BJJ themed t-shirts to do handy work around the house or wear in nogi, but not this shirt, this shirt is going to be able to take a beating. It's still comfortable despite its durability, but don't expect ultra-softness. Again, I really love the ROLL logo, so it's only natural that I love the shirt.

I've been trying to get more out of the companies in regards to who they are and what they are about by doing some mini-question and answer sessions, so here you go, uncensored, unedited, direct from ROLL!

1. What is your personal background in the BJJ community?

I started training over 3 years ago at Next Generation Ireland with Dave Jones under Chris Brennan, it was mainly NoGi so coming from a rugby background muscling people out of it was my go to style as I was young and naive. I visited NY for 4 months but didnt train and when I got back, Next Gen had been taken over by Darragh O'Conaill and affiliated to Riberio and also moved to 90% Gi training which I really got into. I then moved to Long Island NY where I trained at Kioto under Ryan Saboe and GM Mansor for 3 months, then into Manhattan where I trained at Marcelo's when I could with my longest stint being 2 solid months where I learnt alot. Since moving back to Ireland and back to the same Dublin gym which has now evolved into East Coast Jiu Jitus Academy I have been training hard and decided to start Roll Jiu Jitsu.

2. What made you start your own BJJ apparel company?

I got an office job and it has put a stint in my creativity so I needed an outlet. I have always liked graphic design and putting designs on apparel, so combining this with Jiu Jitsu I thought I would give it a go! I felt that there is definitely good BJJ apparel out there but not a whole lot of the more casual nature that doesnt scream ‘I train so I can beat you up!'

3. Do you get inspiration from any other major companies? I kind of get a “Supreme” vibe from your apparel, is that what you were shooting for?

I get inspiration from everywhere, and yes one of our designs which has turned out to me one of the more popular ones may have been inspired from Obey. People seem to like that gear these days and its a very clean and clear look I think.

Shop for Obey apparel and streetwear at Amazon

4. What are your main goals as a company?

As a company, we would like to grow because with growth, we can start giving back to the sport; through sponsorship of upcoming or disadvantaged athletes and even by organizing events and comps to grow awareness of the art and ultimately get more people involved in the lifestyle. It has definitely had a positive effect on our lives and one that we want to share with as many people as we can.

5. What do you feel will set you apart from other companies out there today?

Tough question, there are so many great brands both established and up and coming. Apart from our cool and fresh designs (which everyone company has these days) the brand name ‘Roll' is said thousands of times a day by people training so once the link to our brand has been made, we might stand out from the rest and be in luck!

Must read:  5 PIECES OF BJJ GEAR YOU CAN'T LIVE WITHOUT

6. Do plan on extending your line into the Gi market?

Not right away, if we do it will be through collaborations with existing reputable companies. Seems like a new Gi company pops up every week with quality dropping fast. There are some new and innovative designs but we believe this shouldn't be the selling point of a Gi. It has to stand up to the test of hard Rolling which is hard enough to come by in a manufacturer.

7. What's your personal favorite product that you sell? Why?

Personal Favorite is the grey Roll Crew Neck. Firstly the design is slick and 100% related to Jiu Jitsu. The other great thing is it can be worn for daily hanging out, working out, going out and even keeping warm under your Gi. Its 1-for-all really! With no hood, zips or pockets – nothing is going to get in the way during Rolling.

8. How is the BJJ scene in Ireland?

BJJ is growing big time in the Emerald Isle with great things on the Horizon. More and more clubs opening and memberships growing by the day. Ireland is making it's name on the world stage with some of our top competitors getting recognition they deserve. Darragh O'Conaill getting on the Kumite, Chris Bowe bringing home some medals from Worlds and Coach John Kavanagh Taking Conor McGregor to the UFC.

The future is bright and filled with opportunity for Irish BJJ, So drop over and get involved!