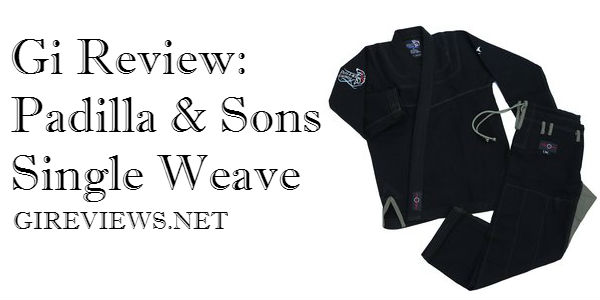 Fantastic Review of the Padilla & Sons Single Weave Gi from Slideyfoot over at http://www.slideyfoot.com/.

Having been so happy with mygold weave, I was keen to order a single weave from Joe as well. Like before, I needed to go through PayPal direct to Joe, but because I'd already done it once, I had no qualms about doing so a second time. Joe even gave me a slight discount due to having bought from him previously, so I got my single weave for £52 ($100), which includes postage to the UK. Available to purchase from theMatRat site.

It arrived about ten days later, during June 2008. I put it straight into a 30 degrees celsius wash, then spun dry on low heat for ten minutes to shrink it down. I washed it three more times after that, spin drying for two more ten minute low-heat cycles. The fit was pretty good after twenty minutes, but I like the gi to be relatively tight, so did a third run of ten minutes and finally two sets of five minutes on high heat.

An immediately clear difference between this and the gold weave, aside from the obvious reduction in thickness, is the large seam down the back. However, having rolled in this gi for four months, I haven't noticed any discomfort from the additional fabric, so clearly its cut in such a way that the seam doesn't dig into your skin or make the gi any stiffer.

The gi trousers initially seemed a little more prone to bobbling on the knees, which I at first thought might indicate they're a good bit thinner. However, that has calmed down after a few washes and months of training, as the knees now look the same as on the gold weave trousers, so I'd guess it was just a matter of washing and drying rather than thickness. They're reinforced in the same way as the gold weave, which is true for the rest of the gi. The extra cloth on the armpits, crotch and knees further adds to durability.

Instead of the fastened loops on the gold weave trousers, they hang loose on the single weave, but that's a fairly trivial distinction. It does at least mean I can distinguish between the two, as otherwise there isn't any way – at least to my uneducated eye – to tell them apart (along with the Padilla shark logo being a slightly difference colour than on the gold weave).

I've found the Padilla & Sons single weave comfortable to train in, well-fitting and so far, durable. There hasn't been any wear or tear up to this point, the threads haven't unravelled or otherwise become loose, and the embroidery has remained as good as new. I would be equally happy to recommend this gi along with the gold weave. Which one you go for depends on how thick and heavy you like your gi. They both have a more judo style cut than some other BJJ gis, with a longer skirt on the jacket. Particularly given its low price tag, this is an excellent product.

Along with the main pic of me wearing the gi (not quite sure why I have the belt so high, but meh), here are some pictures of the seam on the back (rear of the gi on the left, inside of the gi on the right):