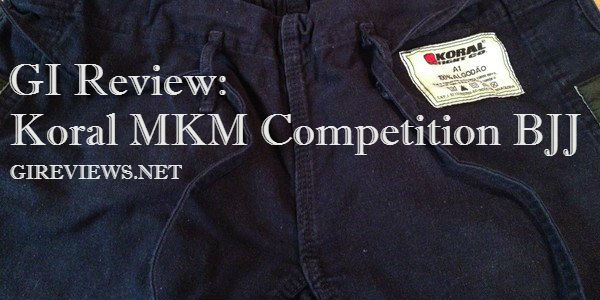 When I first started training back in early 2008 it didn't take me long to accumulate a few gi's. Jiu-Jitsu was a new “thing” for me and I spared no expense to find a gi I simply loved.

I started with a Gameness Platinum, then an Ouano, then I found Koral. Koral seemed to have a style about it that I really liked. Additionally my body type fell really well into their sizing chart. I picked up a blue Koral Classic and wore that for a really long time.

Fast forward almost four years later and my awesome wife purchased a Koral MKM in navy for me last December. I was really excited since I had not had a new gi in about two years and my current assortment of mis-matched tops/bottoms were not holding up well.

The Koral MKM Competition Gi is made in Brazil and 100% cotton.  Typically when people think of Koral, they think of this gi.  It has the most patches of any Koral gis and, if you're like me and like that look, this is a great gi for you.  It has a bit more of a competition cut meaning its a bit thinner in certain areas with a shorter skirt making it more competitive.

The Koral MKM Competition Gi is a high performance kimono designed for world class competition as well as hardcore jiu-jitsu training. This gi features a combination of lightness, but it is not so thin that your opponents can grip you easily. As with all Koral gi's the collar is made of a vulcanized rubber so that it does not absorb sweat and does not promote the growth of mold or mildew. The jacket is made with 1 piece of fabric (no seam in the back) for strength, comfort and durability.

This gi has been used by a lot of competitors for a long period of time and is tried and true.  A great choice if you're looking for a new kimono.  As with all Koral MKM gis, the belt is not included. This gi is made of 100% pre-shrunk cotton so you can expect minimal shrinkage.

My first impressions of the MKM were very good. The stitching is always very clean with Koral gi's. This MKM would be my 4th gi by the Brazilian company. The patches are really nice and set it apart from the standard Classic gi. I know some people don't like having lots of patches on their gi's but I don't fall into that category IF they are done tastefully.

Koral is one of the few gi manufacturers that hasn't changed terribly much since I came into the sport. I feel that this is due to a really good product that is consistent and almost always available for the consumer. 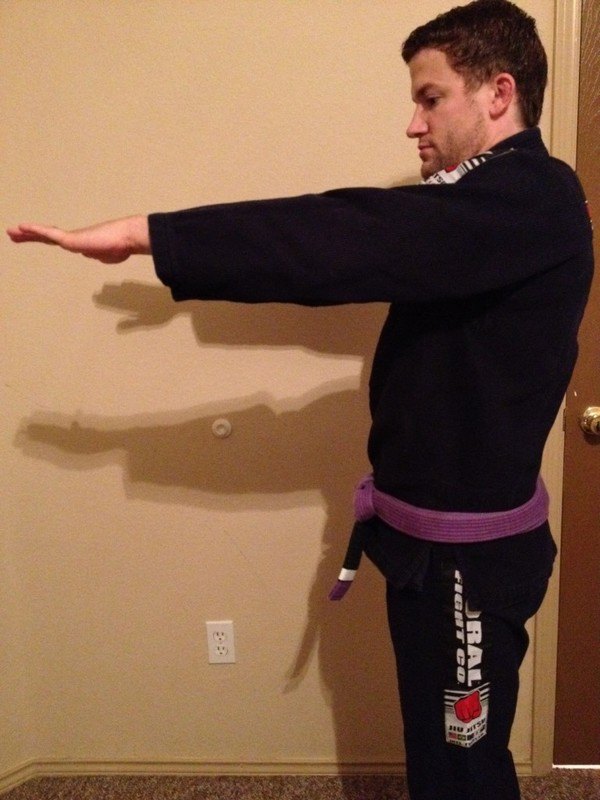 The design of the MKM simply hasn't changed with the jacket and pants. Both fit just as my Koral Classic did back in 2008. The thing that is different about this MKM is the navy blue color. This color is very dark and stands out from the standard white or blue gi's. It is so dark it almost appears as black to some people. If I have a gripe about the design of the gi it is that Koral hasn't made any significant changes in a long time. They have made some recent changes to the Classic gi and even introduced some different gi's over the years but style-wise, not much has changed.

The fit was exactly as I expected. I am 5'7″ and 155lbs. I fall into the high end up of an A1 and the fit is very good. The jacket and pants are not overly bulky or long. They could stand at most maybe 10-15 minutes in the dryer but no more than that. 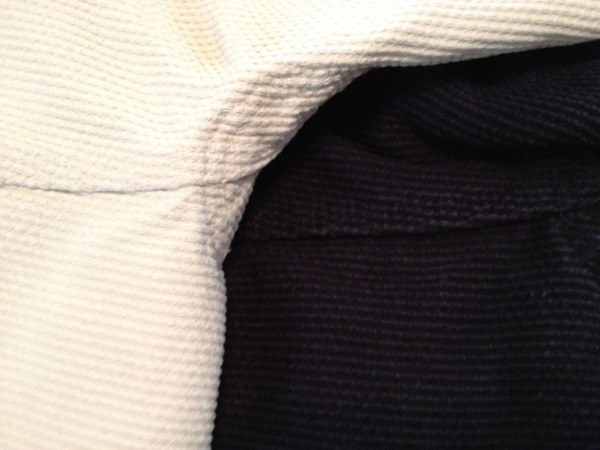 These gi's are pre-shrunk but anyone can shrink a gi in the washing machine with warm water and a trip to the dryer with some medium to high heat. I intend to use this gi for competitions and plan to keep it legal in the fitting department. Washing in cold and line drying this gi is the way to go. I will occasionally throw it in the dryer on low heat with a dryer sheet to soften it up. (Click here for more info on washing and shrinking your gi) 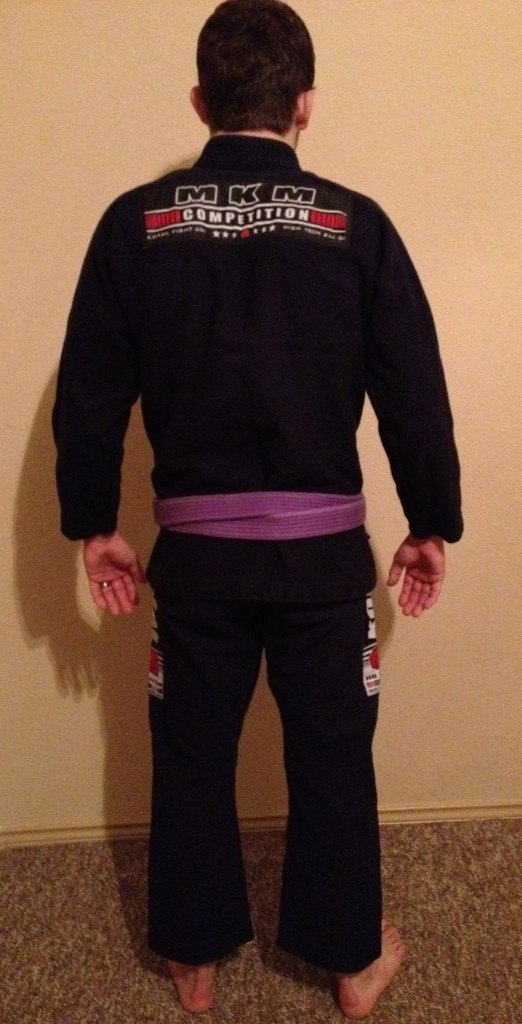 Prior to washing this gi I did soak it in vinegar in the bath tub in an attempt to lock the navy blue color into the gi. This is generally recommended for all colored gi's. Let's be honest, there is nothing worse than a dark colored gi that has faded considerably. I've seen so many black gi's out there that look gray due to old age and hundred of trips through the washing machine.

I have taken special care not to abuse this gi on the mats. I wear it once per week to help preserve it and the gi has not lost much if any of it's dark coloration thus far after five months of use. (Please note in the pictures that I did intentionally shrink the gi a little bit but not a significant amount.)

As I stated before, the jacket is very predictable as compared to the Koral Classic. I had always thought that the lapel was the same on the MKM and Classic. However, upon comparing a Classic gi purchased about two years ago and the lapel of this MKM it appears I may be wrong. 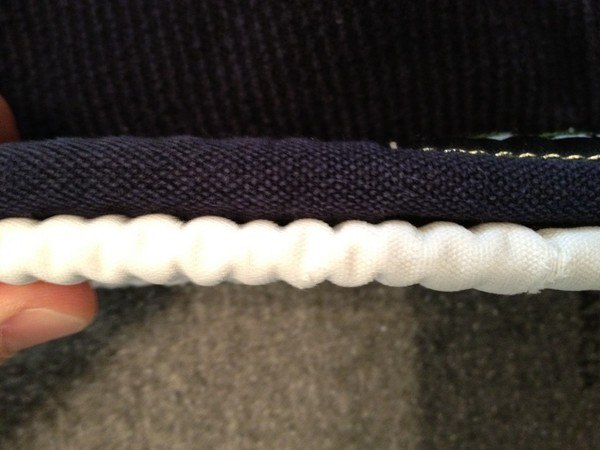 The lapel and collar of the MKM appears to be slightly more thick than that of this Classic gi. I'm not sure if that is due to the age/wear and tear of the Classic gi but I'm willing to be that it is not and was intended to be that way. For all other manner, the fit of the MKM is identical to that of the Classic. The weave and weight feel identical outside of the collar feeling a bit more rigid on the MKM. I think that is likely attributed to the extra thickness of the collar/lapel and the fact that the MKM is just newer. The length and bulkiness in the arms is very acceptable. I do not like to feel like I am swimming around in my gi and this is avoided with the MKM.

The skirt on this gi is an acceptable length resting on the top of my thigh. I find that it is not unnecessarily long but long enough that it makes the lapel tails very useful for attacking with chokes. 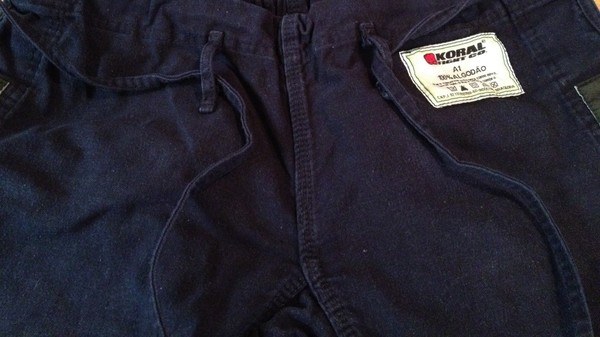 The pants on this gi are one of my favorite aspects of the uniform. They feel like they were custom tailored to fit me. I have plenty of gi's from other manufacturers that are comfortable but very bulky giving my opponents too much material to grab onto. The pants are very fitted but not so much that they will not pass an IBJJF inspection. 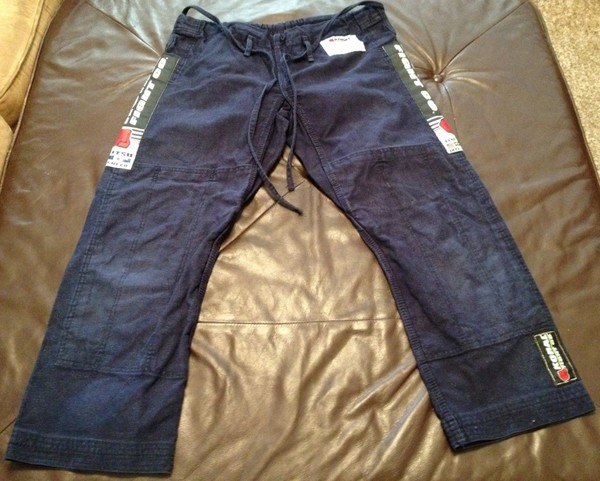 My only gripe about the pants is the traditional drawstring as opposed to the rope style that many other brands have now adopted. You can get these drawstrings very tight but when it comes to taking them off….that's another story. Once these drawstrings are soaking wet from sweat they are a bit of a chore to remove. Untying them isn't really the issue. Once they are untied they simply are very tight against your waist still and require a little tugging to loosen the material from the death hold they have created against your hips. This is a very minor issue for me.

These pants more than make up for this small issue in overall fit so it's not a deal breaker. If they ever adopted a more friendly rope drawstring I certainly wouldn't be disappointed either. The only other modification I could see to make these pants better are double drawstring loops to give more stability to the enclosure portion of the pants. I have never had an enclosure loop tear but if it did, I think it would be nice to have additional loops as a back up. The pants also feature an additional layer of material to reinforce the knees. This is really important for those of us that either have a fitted pair of pants and/or spend a lot of time in guard or shooting.

Rolling in the Koral MKM

My impressions of the gi while rolling are about how I expected them to be….VERY GOOD. This gi feels very fitted on my body. I don't feel like my opponents have any sort of advantage in the grips department. One of my biggest gripes about some of the “Light” gi's is experiencing stretching in the sleeves. This is definitely not an issue with the MKM and breaking my opponents grips is not a chore.

The MKM doesn't feel overly heavy either. The gi itself weighs about 4.4 lbs. Certainly not a “Light” gi but not the heaviest out there either. I have competed once in this gi since getting it and do feel that it is perfect for regular training and definitely competition due to the cut and feel. While I do periodically try other brands I keep finding myself coming back to the one I like best and that is Koral.

My Koral MKM is my latest gi. Again, an A2, and it fits basically the same. The MKM, like the Light, is preshrunk and so it almost always gets machine dried. It’s got a sturdier feel to it, and does not exhibit the same stretch that the Light does when damp. The Koral patches plastered everywhere are a bit over the top for somebody not sponsored by Koral, but I haven’t bothered ripping them off or anything.

This is the best Navy gi on the market and puts the Shoyoroll Yank to shame! My only issue with the gi is to many patches as I like my gi’s clean and with as few patches as possible. You can’t go wrong with Koral!

5’3″ and 140lbs so I decided to go with the A0, because my A1 Koral Classic is a bit to baggy for the way that I like it. Fits like a glove without any restrictions. Absolutely love this gi, in fact I just purchased another in blue

Loved the gi initially but after wearing and washing my thoughts have changed . For one the jacket stretches alot after a heavy roll and sweat and the pants rope is annoying . Its still in the rotation but on the bottom . Hope they will put a stretchy rope on there next model , but I doubt it cause there traditional.

Check out the Koral MKM Pro Competition Gi at Amazon

Do you own a Koral MKM?  Have any questions about it? Post them in the comments below and we'll make sure to answer them!

Disclosure: Please note that some of the links here are affiliate links and I will earn a commission if you purchase through those links (at no extra cost to you). These are all things that I have experience with that I am recommending because they are helpful and are companies that I have personally purchased from, not because of the commissions that I may earn from you using these products. If you have any questions about the links on this page, please email me!