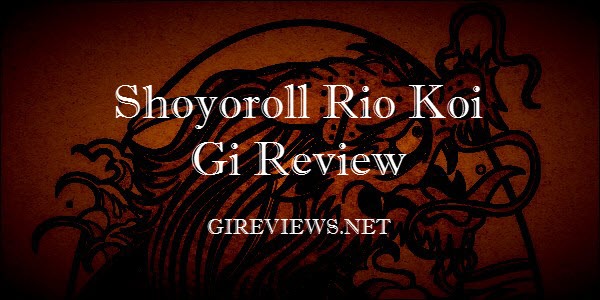 It was released on August 27th, about a month after their last release.  I'm actually glad they split it up from the Ring.

It would've been quite a disaster if 2 gis were released that day.

In addition to covering the release, I've written an article on How to get a Shoyoroll Pre-Sale Guaranteed!  It has tips and links in there that will really help everybody out.

Obviously, I made a huge mistakes in the last one and I want to make sure everybody gets one this time. 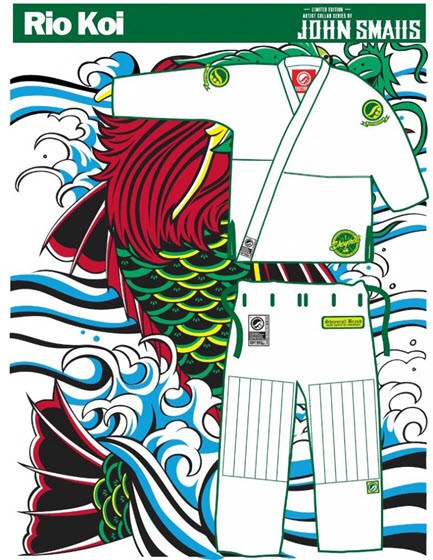 Release: Rio Koi (Artist Series w/ John Smalls) Limited Edition
Sale Date: Monday , 8/27/12
Time: 9:00 AM PST – Until out of stock
Retail Cost: $169.00 each
Notes: Limit of ONE gi per customer
Where: Budovideos.com and Shoyoroll.com Online Store also to our international retailers as well.

Full details and specs with pictures below.

One of our artist series release by homegrown NYC based artist John Smalls. The designs and color ways are influenced by the birth place of BJJ (Rio De Janiero, BRAZIL) and design pattern blend of a Japanese inspired Koi with a Water Dragon (2012).  We will also be featuring pattern art hits in different parts of the kimono. 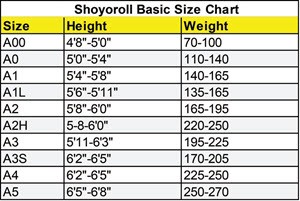 I took a video and photos of the Rio Koi the day after it arrived. Note the pants picture of them on me is just to show how the A2 fits me at 6'1 and 200lbs (they fit great!).

I had high expectations. VERY high expectations. I’m sitting here looking at a $1,580.75 price tag for a Shoyoroll Grey Skies on ebay, which someone actually paid. If that’s not a testament to the cult status of Shoyoroll Gis to the Brazilian Jiu Jitsu community I don’t know what is. That’s a mortgage payment for an average American, that’s NUTS. I don’t even think the Gi is one of Shoyoroll's better looking… but I digress. I couldn't care less about rarity, hype or the status quo. I just want a good gi.

So, with my high expectations, I took the Gi out of the bag and examined it. It was sexy. Shoyoroll Gis sell great for a reason, I like to think that reason is their extremely clean styling. There’s no out of place, mis-match or awkward placed patches that don’t contrast correctly. Although their color use may seem simple, it’s obvious to anyone with design experience that their Gis are very well thought out in the aesthetics department.

It isn’t that Shoyoroll Gis are bulletproof or make you a better grappler (although science does support the fact that if you wear a Gi you think you look badass in, you perform better), it’s the little things that made this Gi stand out to me. I assumed it would be like every other Gi but with just a little better styling. I, fortunately, was wrong.

I love the way the top fits. Just wearing it makes me feel skinny. The slim cut is perfect. At 5’10” 195lbs the A2 fit perfectly. The sleeves are tighter than any of my other Gi’s but I had no issues with the gi top restricting any movements whatsoever.

I want my gi to be as close to my body as possible so my opponents have the least amount of materials to grip. The Rio Koi does not disappoint. The Gi top is extremely light and easily the lightest Gi I’ve ever worn. It’s very very soft and relatively easy to grab but for those hot summer days or competitions where you need to watch your weight, this Gi will do superbly.

Styling wise the Gi top is accented with artist John Smalls Japanese Koi and Water Dragon design at the top portion of the inside of the Gi. It looks beautiful and is sublimated on a separate material as the Gi, which I imagine will allow the colors and to last quite a while.

There’s the standard Shoyoroll hits on the sleeve, which I’d like to point out look much improved over the Compadre and Americana embroidery. These newer version are outlined with a thicker embroidery giving the logos a much cleaner and professional look.

The Gi sleeves and skirt are taped with the same Koi design as the large jacket print and it really makes the Gi pop.  The collar is thin, so you’ll actually have to have some choke defense.

The Gi pants fit me great. Shoyoroll pants are much slimmer, which as I mentioned earlier is something I love. I absolutely cannot stand Gi pants that are ridiculously baggy. (I’m looking at you virtually every other Gi company EVER). At 5’10, I couldn’t ask for a better length. After a single warm wash and medium dry the pants fit me perfectly.

The green rope drawstring and belt loops contrast nicely. The knee reinforcements don’t go to the bottom of the ankle, but they go very far down, more than enough to cover my knee regardless of position.

I have two complaints for the Gi pants. The crotch can get tight at extreme leg separation and would have liked to seen Shoyoroll use a stretchy crotch like the Do or Die Hyperfly. The inside of the crotch does look great though which also showcases the Rio Koi design. (You can now go up to people and say “I have a dragon in my pants! Want to see it!).

The second complaint is that the belt loop system has the same ole 4 loop system. It’s 2012 Shoyoroll, have you seen what Origin is doing with their beltloops? Or Inverted Gear? Having a thicker belt loop closer to the sides of the body prevents the rope from ever coming up over the pants.  Get on it!

So that’s it,  I love the fit of the Gi and it looks stunning. The graphic work and fit really set the Gi apart. I will sit here and tell you when their Guma T-shirts look like poo (massive stinking piles of poo) and I will also give credit where credit is due. So before you criticize a Gi or company because of it's hype, remember that “the devil is in the details.”

After forgetting to remove the jacket from my pile of clothes I was transferring to the dryer the Gi shrunk considerably. More so than any Gi I own. The Lite Tech weave stretches a great deal when wet and I imagine any Gi that stretches is more prone to shrinkage. It fits my wife great though!