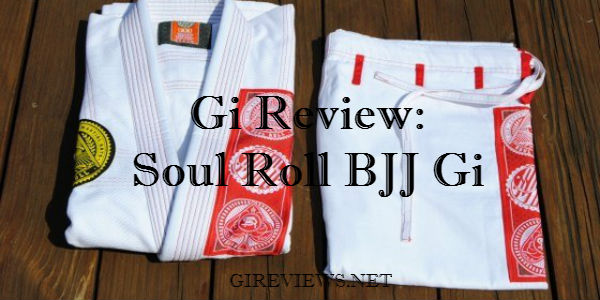 While I really wanted to like the Soul Roll Alpha, there were several major conceptual issues in its design, namely in the cut of the Gi and some of the material choices. The Gi itself looks very flashy, and if you like flashy Gis you should consider Soul Roll, but be mindful of the fit. 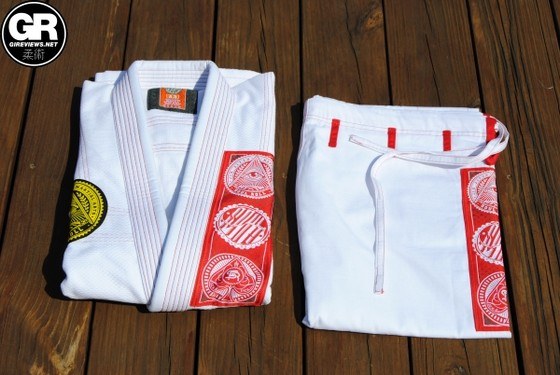 I had never heard of Soul Roll Kimonos before. Upon receiving the gi, the first thing I noticed was the wonderful gi bag. 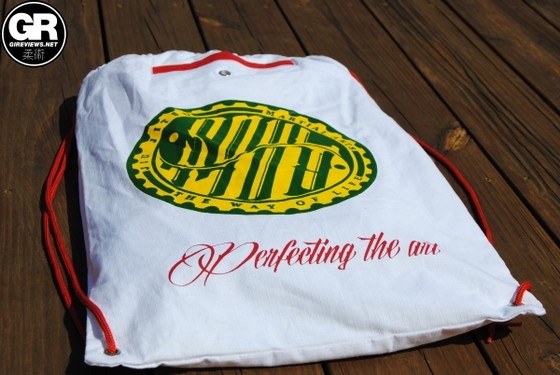 I have never seen a gi come in a bag that is this versatile (namely the size of the bag coupled with the second, smaller pocket). I think that the folks at Soul Roll had the right idea with this. 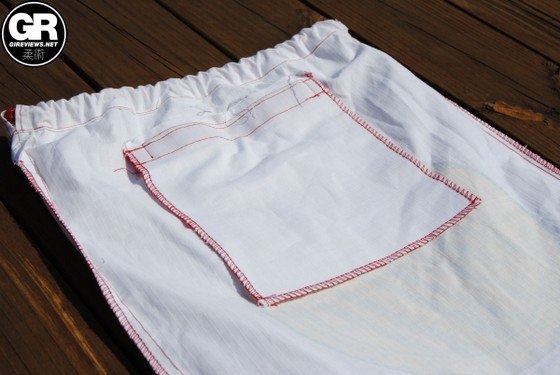 Back when I first started I bought an A4 gold weave which I eventually shrunk to fit, this gi fits like that A4 did before I shrunk it.
The pants are also very baggy which can be problematic while rolling. Bear this in mind when/if buying this gi. 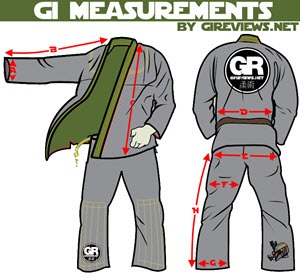 Unpacking the gi, the next thing I noticed was the presence of patches, so many patches, in my personal tastes too many patches, also the theme of the patches is a bit disjointed. 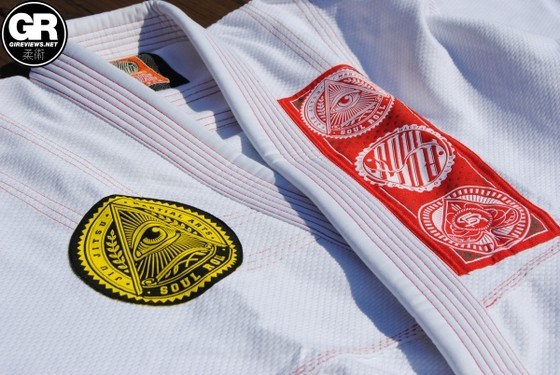 There is an “Illuminati” symbol patch, a spade (like in cards) patch, and a patch with the Soul Roll logo. These are repeated throughout the gi and the gi pants, placed seemingly at random. There is also some neat embroidery on the lower back as well as a print inside the skirt that says “Leverage moves the world.” 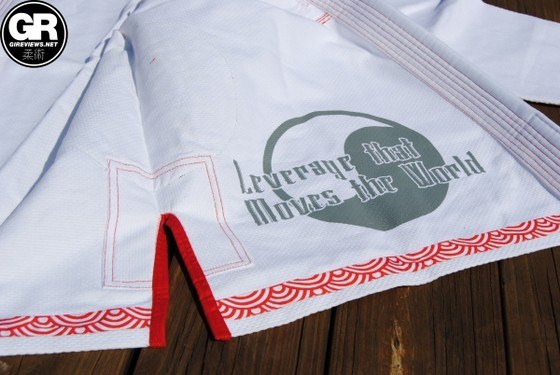 Also the red contrast stitching looks nice with the aesthetic of the gi. It’s an intriguing looking gi, but the first thing one of my teammates said to me was “You look like you’re wearing a nascar jacket.” And as we all know, if you can’t get your teammates’ approval, it’s just not worth it… 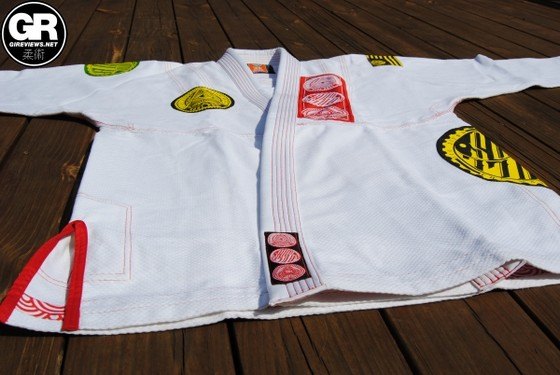 The fit of the gi top is extremely baggy, much more so than any A3 I have ever worn. The skirt and sleeves are too long for me, the body is blousy, if this is an A3, I should probably be wearing an A1 or A2 in this brand. 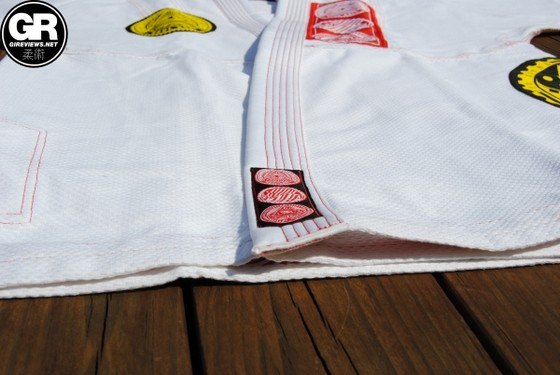 As far as the fabric, the gi top is slated at 350 GSM, what I found interesting about this gi top in particular was the coarseness of the fabric. Other 350 GSM gis I’ve seen were either gold weave or pearl weave, this seems more like a standard single weave made of a lighter fabric. 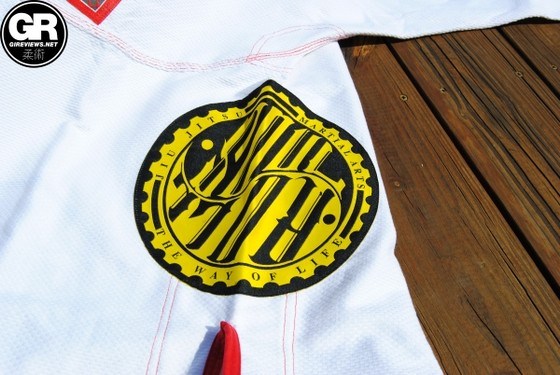 It’s very soft and comfortable, but the lapel doesn’t have a foam in it to give it that added stiffness. 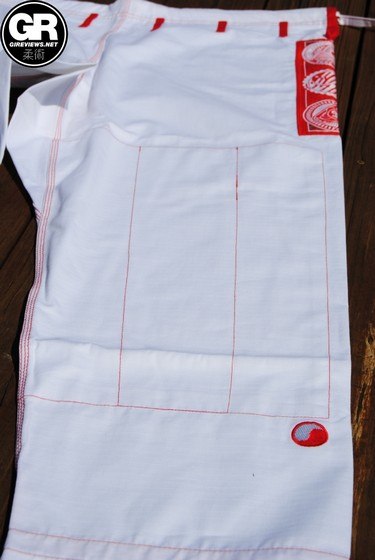 The pants are made of a standard ripstop, it’s not waxy like some ripstops so that’s good but many high end gis have gi material gussets which this gi doesn’t have. 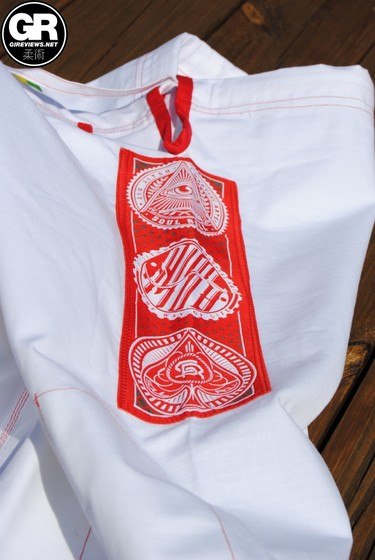 Like many gi pants the Soul Roll Alpha has a double layer of fabric that goes from the top of the knee down to a few inches above the bottom of the pants. 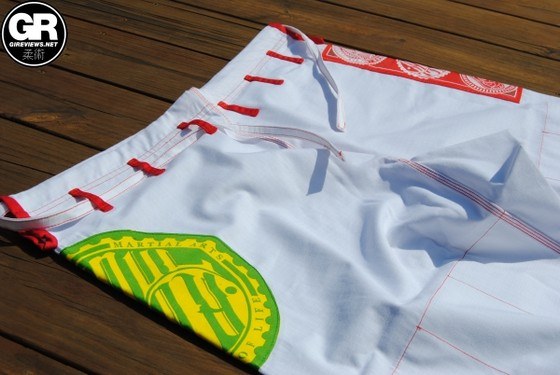 Also the drawstring on the pants of this gi is a flat drawstring. 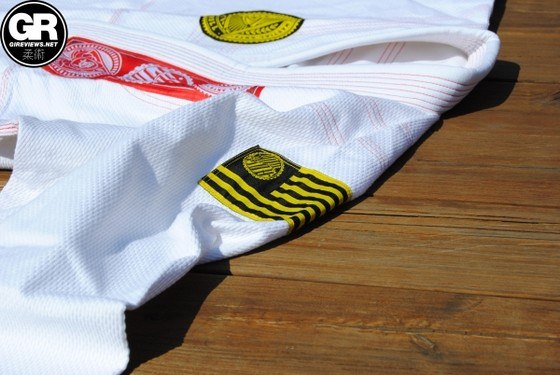 One thing I’ve noticed is that the baggier a gi is the more it gets tangled up and untucked. This held true with the Soul Roll Alpha. 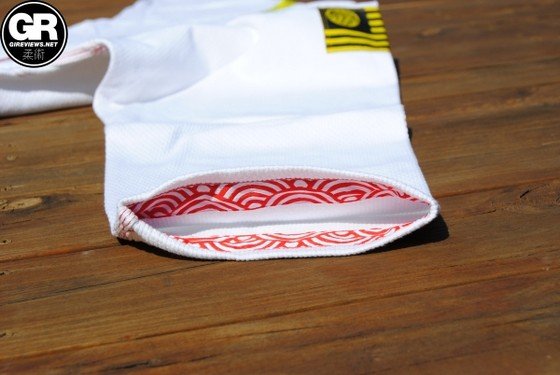 When I wore it I found myself constantly tucking the gi back into the belt, and my training partners had a lot more fabric with which to choke me and retain spider guard (Lack of collar rigidity also facilitated in getting choked) 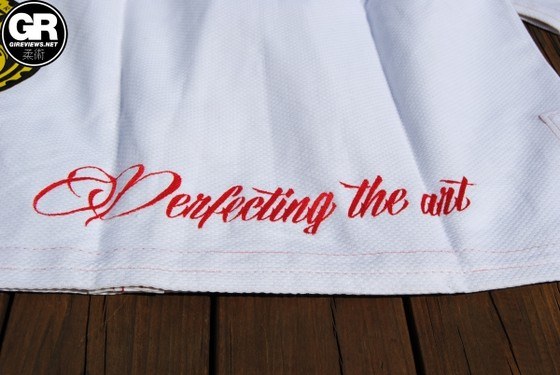 While reviewing this gi I reviewed 2 others, a Lanky FG and a Valor Fightwear. Of the three gis this one intrigued me the most but was a bit of a disappointment given the issues with the fit and the lack of collar rigidity.

If I was a gi bling kind of guy, this would have been my favorite though given the copious patching, it really is a very pretty gi.

Disclosure: This Gi was submitted to me free of charge (by way of gireviews.net) for review. I have never done any work with or for Soul Roll Kimonos.