This Gameness pearl gi review features a 550g pre-shrunk top, ripstop pants and the collar of the gi is also ripstop.  There are patches on the shoulders and lapel and some cool taping along the bottom of the skirt and the pants.

At the time of its release, nobody else had really done a gi like this, so it was pretty cool, but even with lots of other ‘pearl' weave gis on the market, the Gameness Pearl is still pretty solid.  It remains a mainstay for Gameness, but has been replaced by the Gameness Feather and Gameness Air.

One of the advertised features is that its fast-drying so if you train a lot, that may be a cool factor for you.  Lots of people who have contributed to the gameness pearl gi review noticed this (see comments section below for users' reviews).

I'm the kind of guy who likes a gi that has some style but not too much bling. So when I was researching which gi to buy, the Gameness Pearl really caught my eye. I research just about everything before I make a purchase, and the Pearl fit in the mold of the Manto Evo or Atama Mundial gi – which I learned are the higher quality gis out there. 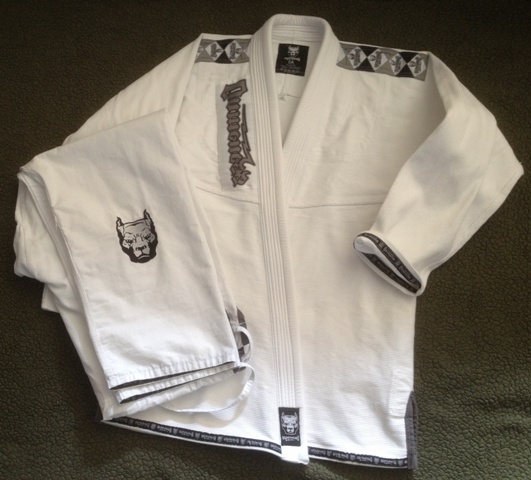 Since this was my first BJJ gi, I thought I'd get a good value gi. I live in Texas so I wanted a gi that wasn’t going to be too hot. (I live in San Antonio, Texas).   I ended up ordering the Gameness Pearl. 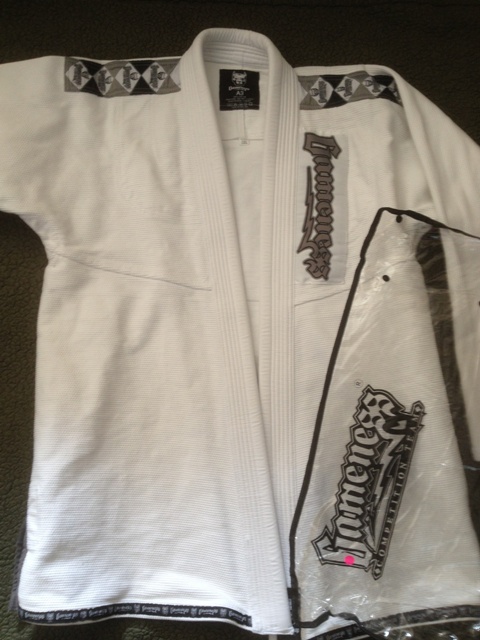 When I first opened the package I thought to that this is a nice looking gi. I bought a white one because I really like the grey trim on the jacket, seam tape inside the wrists and inside of the apron.

The pants are ripstop, too, but not that waxy feeling type. These actually feel like softer cotton / canvas type pants. And they're thicker than the regular ripstop you might be accustomed to if you ever wore military BDU's. The rope is made out of the same material as the gi, I think… although I would've preferred bungee cord better. I never seem to keep the knot tied when rolling a while. 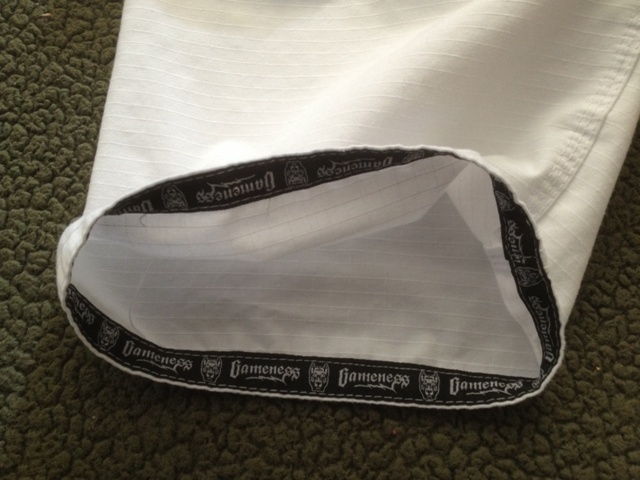 According to their sizing chart, I'm supposed to be an A3 (5'10” @ 188 lbs) with a fairly athletic build. When I first tried on the kimono the arms were a bit too long — about 1-1/2″ past my wrist bone. Also, I was expecting the jacket to be shorter than my judo gi — it's not. It also seemed a little tight in the chest.

Get the best prices for judo gis at Elite Sports

I washed it in hot and dried it on high heat and it did shrink up to about even with my wrists (arms extended forward) and pulled in the chest a little. Hmmm.

The pants have six loops to for the draw string, which unlike my judo gi, they cinch in easily. Again, the pants feel great and are light weight. While I like the pants, they just seem too big. 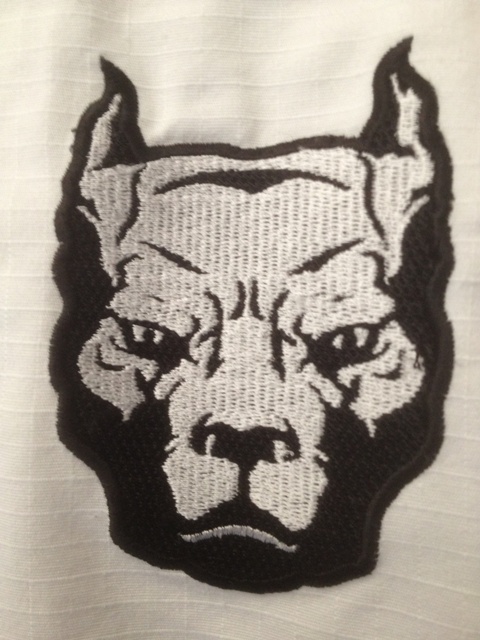 The shoulder patches seem to be designed very well. Not too much… not too little. I don't even mind the chest patch. It has been tastefully designed. However, if you want to remove it you should let them know at the factory before you order because it’s sewn under the lapel.  In some of the pictures it looks as if you could take a seam ripper and take it off.  Not so.

Like I said, I’m really not a bling gi kind of guy, but this gi is just plain cool.  The shoulder tape is tastefully done and the embroidered pit bull on the back of left leg is pretty cool, too.  The designers at Gameness have skills.

The collar is made out of ripstop instead of the cotton, but feels decent. It doesn’t rub your skin, which is nice. Having been in judo, I didn't want a flimsy collar that everyone could easily grab.   Without having yet tried it on, I definitely like it so far. 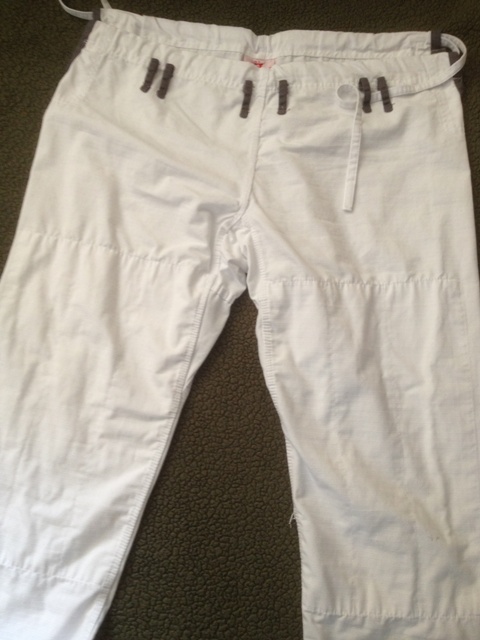 The pants are ripstop, too, but not that waxy feeling type. These actually feel like softer cotton / canvas type pants. And they're thicker than the regular ripstop you might be accustomed to if you ever wore military BDU's.

The drawstring is made of out of the same material as the gi, I think… although I would have preferred bungee cord better.  In previous gis, I never seem to keep the knot tied when rolling a while.  It has six belt loops – two doubled up on the sides and one on each side in the middle.  It draws in without much effort.  The belt loops are grey, so it adds to the cool look and shows their penchant for detail.

The knees are reinforced and the stitching seems well done. They’re not as thick as my judo gi pants but they’ll do.  I wanted lighter and cooler anyway. 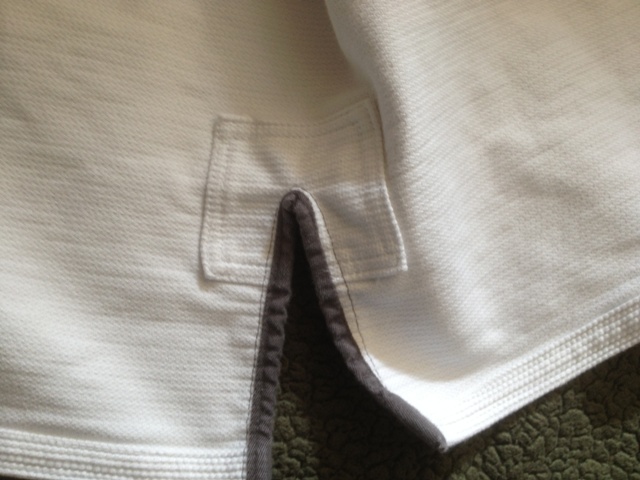 It seems pretty durable yet not too stiff like a double weave. After rolling in it a few times it still looks new. No fraying, to strings hanging and all the stitching seems to still be in place.  I like the ripstop material on the pants.  It is lighter and easier to move in.

My issues lie in fit.  I feel like the kimono wasn’t made for my body type. As for the pants, while the material feels good, after training they feel like they're falling off me and I'm stepping on the pants legs because they’re too long.

While this is a beautiful gi, it just doesn't fit me well. Even if I got an A2, I think the gi top is just cut for a different body type. In a suit jacket, I'm a 44R with 34″ sleeve length. Yet, the A3 seems as if it would fit a taller, thinner fellow much better. If I were to compare the fit like I would a business suit, I'd say it fit like a 44L.

Even though I really like the looks of this gi, it's really doesn't fit me well. It's too bad because the style and looks of the gi is very nice. If I was to do it over again, I’d buy the A3 top and have it tailored to shorten the sleeves and apron. I’d also mix it with A2 pants.

That said, if you’re taller and thinner than me, you’ll love the fit. My last tip would be to request the dimensions instead of looking only at their sizing chart.

Head on to Georgette's blog site to read an insightful review of the older version of the Gameness Pearl Gi.

Disclosure: I bought this gi myself so what follows is a frank and honest opinion about my experience buying my first BJJ gi.  I hope this helps you if you’re researching what gi to buy for yourself.

Please post your own reviews in the comments section below!