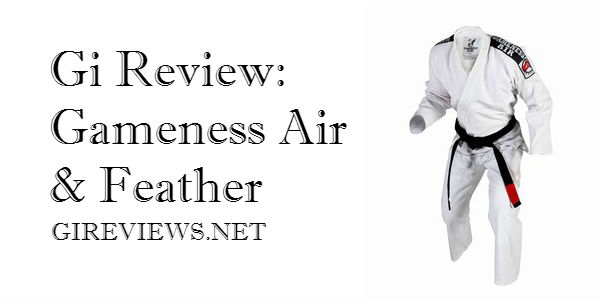 Gameness makes a lot of different types of gis, with the Gameness Air gi being the lightest.  The A3 (which I wear at 6'1″ and 210lbs.) weighs just shy of 3lbs.  The gi is pre-shrunk and is marketed as one of the lightest gis on the market.  Because of that, it will probably best serve as a competition gi or summer / hot-weather gi rather than a daily training gi.

With the exception of a few shoulder patches, the Gameness air gi is pretty understated and simple.  There is no lapel patch which makes room for academy and sponsor patches. 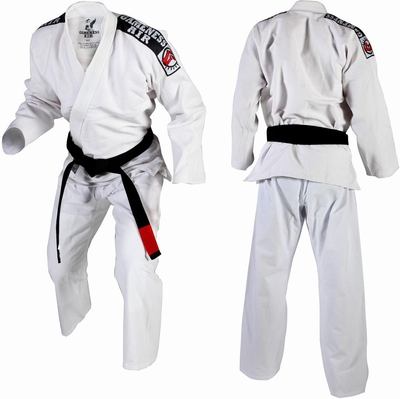 The Gameness air is a pretty affordable gi compared to some of the higher end lightweight gis.  If you pick it up in blue or black, make sure to use the vinegar soak that is common recommended before you wash it or the color may fade a bit.

Although I always wash my gis on cold and hang dry them, people have noticed a larger amount of shrinkage with the white gi.  This may be because during the dying process, the gis have been washed and pre-shrunk a bit more than the white gis.

The Gameness Feather comes with a 475 gram cotton, which is a fair bit lighter than a lot of training gis.  I wouldn't recommend this go for everyday training because it's likely to rip (due to its light weight).

It's the replacement for the Gameness Pearl gi and has become a really popular alternative to the old Pearl weave gi (the Gameness Feather is also Pearl Weave).  The pants that come with the gi are ripstop, as is the collar.  And the gi has shoulder and lapel patches.  I really like they offer up to size A6 for the really huuuuuge guys.

Depending upon who you ask, the “best” gi at any given time will be something that fits them well, incorporates what are considered the latest features and has a good balance between cost and quality (in other words, if it’s inexpensive, some cost cutting in the design/construction is expected and forgiven).

I’ve tried a ton of other BJJ kimonos, but my favorites over the years remains the Gameness Pearl. I own two. I picked up the first one shortly after I started training in BJJ, so I’ve had it for about 3 years now, I’d guess. The second one is a couple of years old. The only noticeable wear on the older one is some fraying beginning to show on the lapels. Otherwise, both still look great, fit great and have worn very well as a part of my regular rotation.

My wishlist of the top three “light” gis I’d like to buy was narrowed down to theGameness Feather (the new version of the Pearl), the Vulkan PRO light gi, and the Bad Boy Pro Series Lightweight Gi. I’ve seen all three gis in person and they all seem really nice, so it came down to price and brand loyalty for me. The Gameness Feather is significantly less expensive than either of the other two choices.

The Gameness Feather out of the bag was big for me. I don’t remember honestly whether the Pearl shrunk at all when I first got it, so I was a little nervous. Around the waist and in the shoulders, it was too big. The sleeves were 2 to 3 inches too long and the pants were a good 2 inches long, as well. After washing in hot water and machine drying, It shrunk up to just where I want it. It fits perfectly now.

The gi top was soft out of the bag, but the pants were really stiff. The ripstop fabric is super light, but it was like a starched shirt. The top is a tight weave fabric that looks to me like the pearl weave I’m familiar with. After the initial wash, the pants didn’t let up at all, and if anything, got stiffer, while the top softened up even more.

Quick tip for anyone thinking about dying a gi, you should plan to wash them and dry them completely to shrink them up. If the gi you’re thinking about dying has been line dried and you’re worried about shrinking it up, you might not want to dye that gi. Chances are, like my A2 Shoyoroll, you’ll dye it and end up having to sell or give it away because it shrank too much.

Anyway, back to the Feather, the dying process is rough on fabric and the gis come out of it like cardboard, but washing it with the Milsoft fabric softener brought it right back. Subsequent hot washings doesn’t seem to have shrunk it much more, if at all. Hope so this Gameness Gi review will help you alot.

really nice gi for the price, i use it as my comp gi and i have a pearl as my training gi. I will always use gameness gi’s when its time to buy another one..

Just purchased this Gi – arrived in record time to Australia (4 days) so extremely happy with the service from Budovideos.

I weigh 78 kilos and the a2 gi fit nicely straight out of the box. Although it is a lighter gi it feels very strong and durable so no problems there. My only slight criticism is that the pants feel a bit stiff and felt like wet light denim when rolling. Not a big concern though and I would have no problem buying another Gameness Feather gi again.

This is my all time favorite gi and Ive owned over 30 so far. Its made very well, I can see it lasting for years!!

Gameness is defined as the amount of unyielding spirit ones possesses.  Gameness seeks to provide training apparel to those who need to focus on running a training center, retail store, or fight team.

They provide high quality gis and have been around for quite a while.  They're a fairly reputable brand and have stayed competitive in the brazilian jiu jitsu gi market for years.

They're recently started branching out of the traditional BJJ gis into making lightweights (Feather and Air models) and cooler gis with contrast stitching (the Elite).  The vast majority of companies carry Gameness Gis and they can be found at most major tournaments.