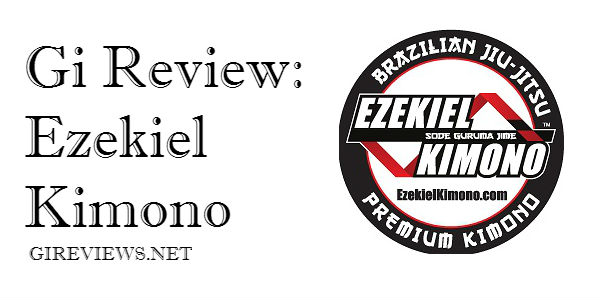 A Fair Showing for a First Release

The Ezekiel Kimono is well constructed Gi that is durable and light weight, although it does have some minor issues. I think most people would be quite pleased with the purchase of this Gi, but do note, the slits on the sides of the skirt are cut a bit long. On the flip side, there is some new innovations as well.

At $129 the Gi is not as well refined as it's more mainstream competition in regards to those “finishing touches”. For example, the strings of the pants aren't knotted when you receive the Gi. Also lacking is the standard Gi bag that every company I have received a Gi from to date has provided, and although I don't buy a Gi for a bag, I also don't buy a car for cup holders, but who doesn't want more of those? Am-I-rite?

It does however, come sealed nicely in a ziplock bag to protect it from the elements during shipping. So if you're a meat and potatoes kind of guy and not really interested in any extra jazz or fluff, you won't be bothered.

(Side note: I'm an avid Gi bag collector and the Tatami Estilo 3.0 bag is my favorite and despite what Brendan thinks, my addiction is NOTHING similar to a woman who collects purses.) [Dan has requested that his gi bag collection hence be known as his “murses” ~ Brendan]

“We make our gis with competitors in mind. Lighter weaves are good for weigh-in purposes, but can cause difficulties when trying to break an opponent's grip during a match. After many discussions with competitors, we used 550 GSM (fabric weight) pearl weave for the jacket, which is made from one piece of material with no back seam for comfort. The Lapel has EVA foam inserts to prevent gi chokes. 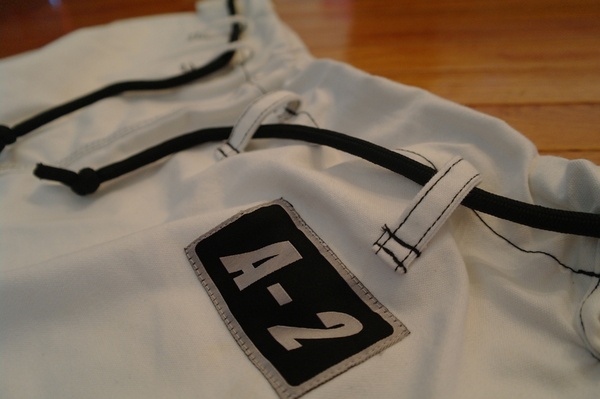 Pants are made from strong 12 oz drilled cotton with triple stitching all around for maximum durability. We’ve added a rope drawstring and four belt loops for comfort. The gi cut allows for maximum mobility for guard players. 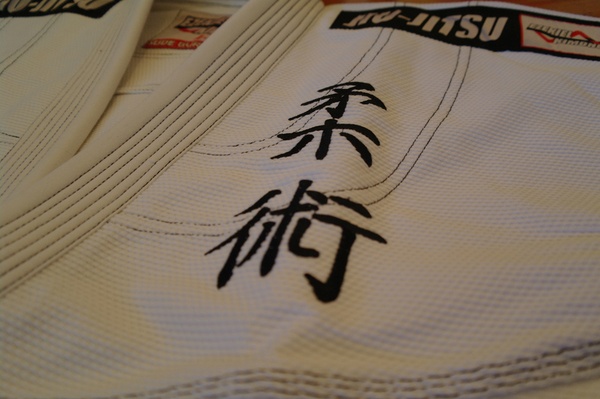 The Chinese characters on the pant and the chest mean “Jiu Jitsu”. On the back of the skirt, we added a long patch with our logo and “Sode Guruma Jime” which means “sleeve wheel choke” in Japanese. If you have any questions concerning sizing, please check our size/dimension chart or e-mail us at info@ezekielkimono.com”

This Gi is light, generally comfortable and made well. I have been very fortunate that I have never worn a Gi that I felt had subpar craftsmanship and I am pleased to say that Ezekiel Kimono's initial offering of a pearl weave does not set a new trend in this regard. I couldn't find a single loose thread on the entire Gi. Another aspect of the Gi I really enjoyed were the shoulder tapes and rear-skirt tape. The tapes were thinner and less explosive than many other companies shoulder tapes. This provides the Gi with a really clean look overall. 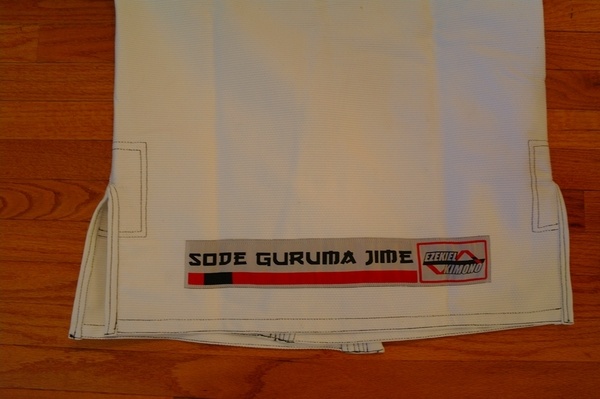 Probably my favorite feature of the Gi was its introduction of, soon to be revolutionary, felt seam tapes around the wrist. It's really an ingenious idea that was definitely well received by me in its execution. It's quite soft and in turn makes the sleeves that much more comfortable. 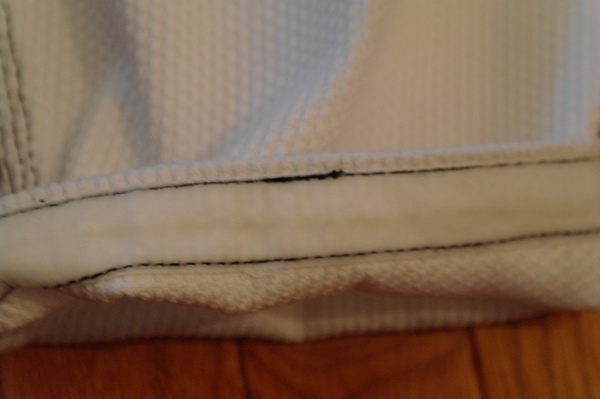 Although I was taken-a-back by the strings not being knotted with the delivered product, it was a simple enough fix and overall the belt system gets the job done nicely. I had no issues with a saggy waist or the rope riding over the waistline. The pants also have a very sturdy 4 stitch seam around the bottom of the legs adding strength and also making it quite difficult for your opponents to grab. The knee reinforcements are also double-stitched where as I typically see them being only single stitched. Another plus. 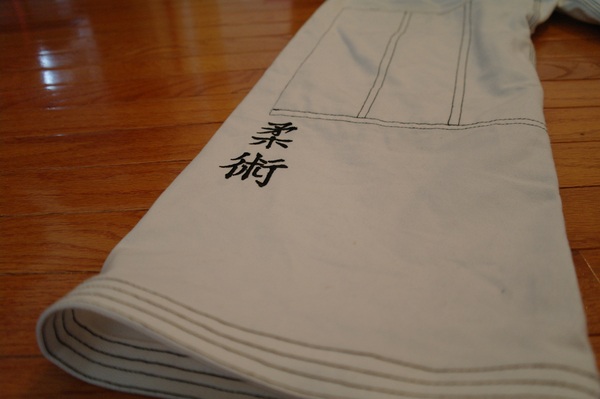 The 12oz cotton pants were very comfortable. Due to a shortage of sweat pants in my house I tend to wear my more comfortable gi pants around the house when I'm being lazy (which is 99% of the time) and I've lounged around in these pants a few times now. Wearing Gi pants at home is also just a nifty way in giving me more time to scrutinize pants. [Sounds like me ~ Brendan]

The embroidery on the chest was of good quality and the collar was standard fare. 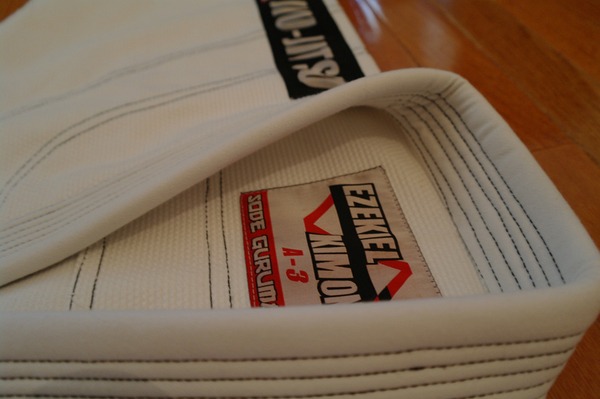 My Ezekiel Kimono customer service experience was amazing. They have a very professional site and great people working behind the scenes at the company.

Man, the slits in the side of the Gi are HUGE. They actually come up above my belt line. This causes the skirt to ride up out of my belt quite a bit. However, it doesn't prohibit my mobility and I attribute it more to a nuisance than a true functional problem as all of my Gi tops do the same thing at some point during rolling, just not nearly as often. 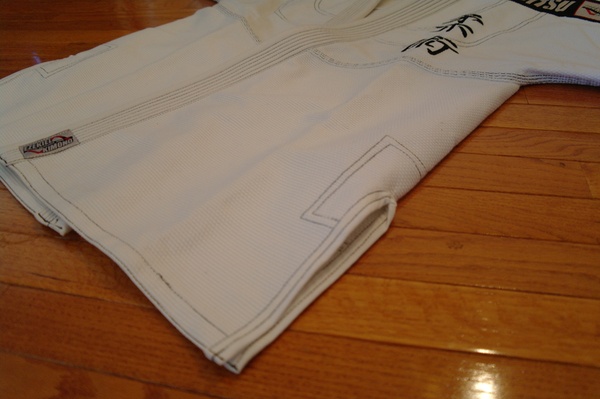 As previously mentioned, no Gi bag comes with the purchase of the “Jiu Jitsu” gi and the belt rope comes untied. Two items I view as hindering it's potential price range.

The knee reinforcements are double-stitched, which is nice, but I would have liked to have seen them extend further up the leg.

On a scale of 1 to “Sex and the City” my wife gives the Gi a solid “The Notebook” (probably around a 9) in the looks department. She digs oriental styling so the embroidery made her all giggly.

Being the wild and dangerous adventurer I am I was curious as to why Ezekiel Kimonos chose Chinese lettering for “Jiu Jitsu” as jiu jitsu is traditionally a Japanese art. I never really got an answer but I'd definitely like to find out why in the future.

With all of this said, I see a lot of potential in Ezekiel Kimonos. In their initial offering they have already offered up some innovative creations for the masses. I can only imagine how well off they will be with a little time under their belt.

To purchase Ezekiel Kimono's Jiu Jitsu gi, or to see some of the other cool designs they have coming out soon, click here!