An Interview with the mind behind Fluxk BJJ Apparel

An Interview with the mind behind Fluxk BJJ Apparel

A Brief Interview with Bob from Fluxk BJJ

GiReviews: Tell us a bit about your background with martial arts.

Bob:  Uh, let me think. It’s been 10+ years and a lot of experiences but I’ll try to be succinct.

I actually took Karate when I was a little kid just long enough for my parents to buy all the gear and then quickly moved onto something else; my ADHD in full force. I’m sure they were thrilled!

Formally, I began training Jiu Jitsu while a student at the University of Illinois. The club I started with was called Goshin Jitsu. It was a great intro into martial arts with knowledgeable instructors and a great group of people. They really stressed fundamentals (e.g. break falls, footwork, timing, etc), which I think is key to any endeavor.

Look for your favorite BJJ gis at MMA Overload

In addition to Goshin Jitsu, a few guys trained at a place called McVicker’s Martial Arts which offers world class Brazilian Jiu Jitsu, Jeet Kune Do and Filipino Martial Arts (Kali). That’s where I got hooked on BJJ. I trained there with Jack and his team for several years while in college and still get back to Champaign a few times a year. While in college I also dabbled in Muay Thai and MMA but not enough to claim much competency.

After college I moved to St. Louis and took a few years off training for a combination of reasons (e.g. grad school, injury) but came back and started training with JW Wright and his school and then my good friend Kyle Watson moved to town so I stated training with him. After about 5 years in St. Louis I took a job in NYC and trained under two Renzo Gracie blackbelts, Aaron Milam and Jin Yung, at a place called Workshop for about 7 years. I feel crazy lucky because all these guys are great people with quality schools/students. 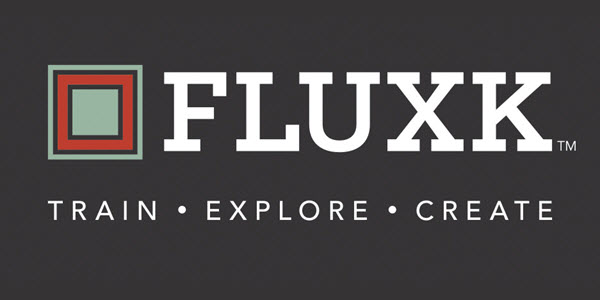 With the online BJJ/MMA marketplace becoming increasingly saturated, what made you want to start Fluxk?

When I was doing my market research for Fluxk I think I found well over 125 BJJ/MMA Gi and apparel companies and I know there are even more I didn’t see; not the most encouraging numbers for a potential new entrant! However, there were only a few that I could actually relate to. I’m going to sound old saying this but when I started BJJ in 2000 there were a lot fewer companies and shit, the internet was in its infancy compared to today.  The first few Gi’s I had were Howard Combat Kimonos (a single weave and a double weave). These Gis were awesome; nothing flashy, highly functional. You could stand them up after being washed and they wouldn’t collapse; they were like tanks. What I really liked about them was the simplicity and that’s what I wanted with Fluxk and what I thought was missing from the market for the most part. I wanted to bring modern materials and design to the old school mentality of function over flashy. I don’t remember anyone really caring about what his or her gi looked like, just about when the next time we were going to train.

Shop for your favorite single weave gis over at Amazon

What do you feel makes Fluxk different from every other BJJ brand out there right now?

That’s a really good question! To be honest, from a materials perspective the marketplace is a commodity right now from what I can tell; Gi’s are made the same way from the same quality cotton for the most part. Don’t let the marketing bullshit fool you. There are only a few companies innovating in that area. Origin comes to mind as an actual innovator and seems to be doing some rad things. I’d love to go check out their operation one day, I’m curious and jealous of what they have going on. So, I’m not going to say my Gi’s are different in material and build; they are basically just the same as most other companies. I’d like to get to a place where I can innovate from a materials perspective but as a self-financed start up I don’t have the funding to support it yet.

However, the places where Fluxk stands out is in our minimal yet refined functional design and attention to detail combined with a goal of celebrating the BJJ practitioner who loves to train, explore, and create more than what their Gi looks like. I don’t want people to misunderstand that; I think there is a lot of cool design and artwork out there today. I would just like to see the pendulum swing back a little closer to center and see people mostly stoked on traveling the world and training rather than spending $500 on a Gi and wasting their time standing in a line to buy a new release.

On your site, you talk a bit about the concept of minimalism.  What does it mean to you both in your design, and in life?

Whoa, now were getting deep. Light up that J and then let’s talk.

I’ve been told and I remember never really being interested in “things”. I was always running around playing sports and not thinking too much about anything else. My mom tells a few stories of me wearing the same pair of sweatpants for years as a kid or moving me to college in an old army duffel bag, that’s it. My dad is similar in that way, so I think I come by it naturally. I’ve always related to the internal experience more than the external influences. I also grew up in a very simple yet nurturing environment so I’m sure there is that influencing element in it too.

When I moved to NYC I got really into minimalism. Part of it I’m sure stemmed from living in a 400 sq ft apartment which requires you to take inventory of all your material objects and keep only the essentials. The other part was from an emotional/spiritual perspective. I basically didn’t know one person when I moved so it was a prime time to reevaluate all aspects of my life and focus on the most essential elements like, quality friends, family, etc. I’ve found, for me, that investing more in experiences like traveling and people rather than designer clothes has made for a more fulfilling journey.

All this I’ve tried to translate into my brand and design. Again, encouraging the experience more than spending time worrying what I look like rolling. I figured I’m not that unique so I’m hoping there are like-mind individuals that can relate.

Sure, I think there are a few things.

First, I understand it may seem paradoxical for a company with a minimalistic ethos to be selling materialistic goods. However, we train a sport that requires a Gi so please consider Fluxk the next time you purchase one. Actually I know it sounds counterintuitive for a company to say but only buy a Gi if you really need it; some of the coolest Gis are ones that have been patched and repatched to the point where the cotton is literally disintegrating.

Next, I like to let people know that this company is really more of a creative outlet than a money making endeavor; in fact the goal is to give back to the BJJ community as much as possible. For every sale we reinvest at least 1% back into the community through donations etc. The reinvestment percentage rises the more we sell.

Lastly, I want to sincerely thank everyone that has supported Fluxk so far. My hope is that word will spread enough to allow us to continue to deliver on everything you need; nothing more, nothing less.

Compare prices on the newest gi brands at Amazon