Like many people, I had no idea jiu-jitsu would change my life when I first started it.

I didn’t even know what jiu-jitsu was when I took my first class. I was a few months into my kickboxing journey in Costa Rica, which I’d begun after a close call with a taxi driver who tried to sexually assault me. I wanted to learn how to beat people up so that I would never have to feel that powerless again. My boyfriend at the time had just started training BJJ at a neighboring gym and suggested I try a class at my own gym. I don’t honestly remember falling in love with it – I just liked it enough to keep showing up, and months later, I realized that I probably wasn’t ever going to quit.

That first class was about eight years ago, and it’s weird to think that there was ever a life for me before jiu-jitsu. I was physically and mentally stronger. My social group expanded dramatically, giving me friends I never would have even attempted to get to know if we hadn’t had the chance to roll around on the ground together. It’s helped me in my unending battles against depression and anxiety. It’s led me to my job, to my current relationship, to various states and countries, to a more enriched and open-minded version of life.

But, as with any industry, the deeper you go, the more darkness you’ll find.

As much as the female presence in jiu-jitsu has grown over the years, even since I first started my own journey (which, relatively speaking, was not that long ago), BJJ remains a macho, male-dominated sport. The positive side of this is that I have met countless incredible men who are giving other men and boys a healthy outlet for their emotions, all while making the women feel welcome and supported on the mats. But when you start flipping over the proverbial rocks in jiu-jitsu, you begin to realize that a lot of people in leadership positions should have long ago been ostracized by the community.

Most of the negative experiences I’ve had in jiu-jitsu have come from these unworthy leaders: black belts preying upon naïve new white belts, big-name athletes who are coddled by the community even as they publicly spout racist or homophobic or transphobic or misogynistic rhetoric, coaches who preach honesty and loyalty without extending that same basic respect to their students. It’s been a huge wake-up call, but it’s also shone a light on the people in the community who are actively working to combat that culture.

I think, for this reason, my biggest influences in jiu-jitsu aren’t exclusively those that have helped me develop my game stylistically (though I believe the person who has done the most for me in that regard is my current coach, Nick Hughes), but also those that have either pushed me competitively or shown themselves to be good role models in the community, whether they’re big names or “just” my teammates. My jiu-jitsu and my place within the community are the collective work of everyone who has ever given me a positive experience on the mats.

I’ve also gotten to meet a ton of cool people through jiu-jitsu, and I think we take for granted how easy it is to train with the “celebrity” athletes we follow. And having met a bunch of athletes who have let their isolated fame get to their heads, it’s been super cool to have met and/or trained with people like Richie Martinez, Ffion Davies, Livia Giles, Lachlan Giles, and Orlando Sanchez. It’s far from an exhaustive list of elite BJJ athletes who have left a positive impression on me, but they’ve all stood out to me in a good way. Jiu-jitsu is also directly responsible for the amount of time I spent in Costa Rica (four years), my big move to Australia, and work trips to California and Abu Dhabi. I feel extremely lucky to have found a sport that contains so much potential for new experiences and connections.

I’m interested to see how jiu-jitsu develops in the future, obviously from a competitive standpoint (Are pinky locks going to be the new wrist locks ten years down the road? [Kidding. Kind of.]), but also from the perspective of the broader community. I think and hope that we’ll see more people being able to earn money through BJJ, but I also think we’ll start to see more hobbyists and the adjustment of teaching methods to reflect the growing number of practitioners with different needs, such as older or adaptive grapplers. There will be traditionalists who will complain that jiu-jitsu is being “softened,” just like there are already people complaining about the trauma survivors and busy parents who need a different form of jiu-jitsu than full-time competitors, but personally, I’m looking forward to seeing the sport branch out to meet the needs of other people. It’s given so much to me, and if there’s any way to get more people involved so that they could also get something out of it, I’m all for it. 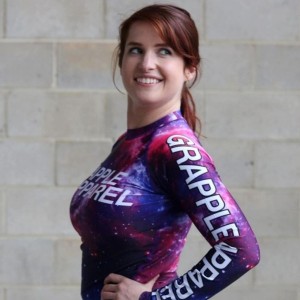 Averi Clements
Averi is a brown belt under Andre Oliveira of Pura Vida BJJ in Costa Rica. When she's in the USA, she trains at Mark Shrader's Mixed Martial Arts in Washington, Pennsylvania. Follow her on Twitter and Instagram: @bjjaveri.