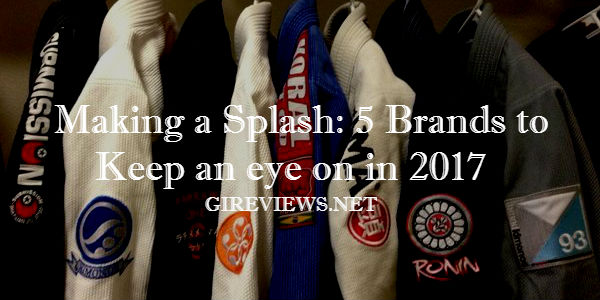 We published this post back in 2012 and, five years later, we're updating it to become more relevant with the times.

Many gi companies have come and gone (in fact, some gis that have been featured and reviewed here may no longer be around) while some have stayed along for the ride. Keeping up with who are still around, who have closed shop and who are starting out every single day is still huge work and, surprisingly, still impossible for us to keep up.

Want the latest BJJ gi? Get them at MMA Overload

If you still do some BJJ training or are planning to start out this year, here are a few of the big brands that we believe is worth keeping an eye on. We've also added some of their best (and some of our favorites) from these different brands:

They may have been in the BJJ gi industry for the last 15 years but it seems that they are not slowing down anytime soon. Aside from creating among the best gis used in both training and tournaments, Gameness is also known for its quick and very helpful customer service that always put their customers first. They have also been receiving awards left and right which is why they are worthy of being added in the list.

Get the best GAMENESS gis at MMA Warehouse

Hayabusa is actually a Japanese word for the Peregrine Falcon. This falcon is a predator best known for its power, speed and strength — the very same attributes that are possessed by the combat athletes that make use of their products. Although the brand is mostly known for its MMA apparel, they also make the best BJJ gis which is why they are still worth watching out this 2017.

Scramble flew out of the gates at the end of 2011 with the 1chiban gi.  The fact that they did a fast return time on their first pre-order gi, coupled with their dedication to carrying a regular line of gis in-stock makes them a strong brand.  Also add in their incredibly creative and innovative shorts, rashguards and spats (our favorite are the Aoki spats), and they are definitely poised for success in 2012 — and still continue to reap success until 2017.

Compare prices on your favorite SCRAMBLE gis at MMA Warehouse

In 2011, Tatami took an already superb line, which included their Estilo and Zero G gis, and added a bunch of very flashy items including the Terere gi (which we'll be reviewing soon!), the Pin Up gi, and the Honey Badger Rashguard! Six years later and the brand still continues to produce among the best gis in the world.

Fuji is a brand with a lot of history and tradition up its sleeve. In fact, it has been producing among the best BJJ gis for the past 50 years. They are still trusted up to this day that many well-known professional fighters around the world use their gis for both training and competition.

Brands we've featured in the past:

If you want to keep track of all these brands, including when they go on sale (as well as coupons and discounts), make sure you sign up for the mailing list using the form below!