The jiu jitsu gear market is full of companies that produce gear themed after pop culture icons, but very few of those companies ever produce officially licensed gear with the logos and characters that they portray. Fusion Fight Gear has burst onto the scene, offering officially licensed jiu jitsu gear bearing the logos, and iconic characters of some of the more famous franchises including Star Trek, Street Fighter and The Terminator (amongst others).

I received their recently released “Mr. Spock” gi the other day and will be reviewing it over the next months. My initial impressions are very good!

This gi is part of a limited run put out by Fusion Fight Gear, only 300 have been made. The weave is called a 550 GSM “Japanese Weave” and looks like a densely woven single weave. The gi is notably soft and the fabric feels very substantial.

The fit of the gi fresh out the bag was a bit big on my normally A2L frame, but after washing and drying it, it fits me fine.

What makes Fusion Fight Gear gear special is that it is officially licensed and uses the imagery associated with the characters that it represents. This gi features a clean white and blue color scheme, with various subtle Star Trek themed hits throughout.

I am confident that after being put through the paces this gi will pass with flying colors and prove to be a worthy representation of the beloved franchise which it represents.

The Fusion Fight Gear Mr. Spock Gi is just one item on their consistently growing line of awesome, officially licensed gear based on various franchises.  These guys are on point.

I’m a sucker for officially licensed products, especially when they relate to something I’m passionate about (like jiu jitsu).  I first heard about Fusion FG when one of my teammates bought some of their compression gear (specifically their Street Fighter Blanca rash guard and spats).

I thought, “Wow, this is a cool concept!  I hope I get to review one of their products!”  And then the magical day came when the Mr. Spock arrived.

The gi arrived in a nice custom gi bag with Star Trek and Mr. Spock themes on it.  Fusion FG is one of only a few brands that I’ve come across that numbers their limited edition gis, this gi was 295/300.

Get your own Limited Edition gi from MMA Overload

This gi is a work of art.  The materials they chose are gorgeous, and the Spock/Star Trek theme is on point.

This gi is an A3.  As I always mention the very best size for my build is A2L but I can wear A3.  This gi fits me like an A3, just a bit baggy in some areas, but definitely wearable.  I can’t complain about the fit of this gi, but if Fusion FG made an A2L I’d probably prefer that.   I did like the length of the arms and the pants very much. 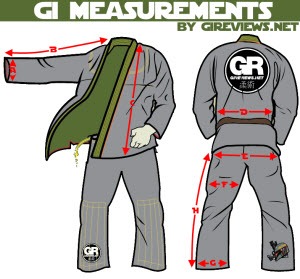 The gi features a very fresh and clean design.  The color scheme is white with blue accents and contrast stitching.  It also has various Star Trek and Spock /Vulkan hits throughout.

The venting, collar piping, and belt loops are made out of a silky synthetic material in light blue.  The seam tape is silky darker blue with Fusion FG’s logo and the image of stars on it.

This gi has a very fresh look to it and I really enjoyed wearing it.  I got a lot of compliments whenever I’d wear it.

The jacket is made of a material that Fusion FG calls “550 GSM Japanese Weave.”  I liked how soft this single weave fabric felt while at the same time being coarse enough to make gripping the gi difficult.  I noted that the fabric chosen for this gi by Fusion FG doesn’t stretch when sweaty, which is a big plus.

The collar is perhaps my only qualm with the gi, as it is a bit thinner than I’d generally prefer.  It is made of EVA foam covered in the same soft, buttery twill that the pants are made of.  The collar had a slight durability issue, which didn’t affect the performance of the gi.  I put test gis through the ringer, this one was rolled in at least once a week for 4 months.  I personally think that when a collar starts to split in this manner it actually looks kind of cool, so I’m not complaining, just noting. 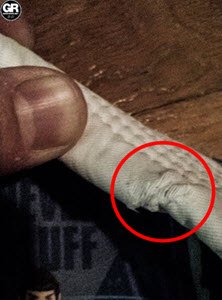 As for aesthetic design: the gi has a star trek badge right next to the left lapel.  On the left arm Fusion put a logo that is called the IDIC symbol (Infinite Diversity in Infinite Combinations) which is really cool because one can say the same thing about jiu jitsu.  On the right arm, the famous “Live Long and Prosper” motto of the Vulkans can be seen with the standard hand gesture that accompanies.  Last but not least, Fusion FG has their logo between the shoulder blades.

Like many gis this gi top features a mesh yoke panel.  This yoke panel has various pictures if Spock and features his different sayings.

The gi top also features a prominent half inch piping running alongside the lapel all the way around.  I like the look of this, and I think it made gripping the collar a bit more difficult.

The pants that Fusion FG made for this product are amazing.  I mean seriously, top notch.

They list the pants as “300 GSM Double Twill.”  These pants feel like lightweight khaki trousers.  Dense but soft.

The pants feature full length double fabric cover from above the knee to the bottom of the pant legs.  They also feature a synthetic gusset fabric from the same fabric as the rest of the trim on the gi.  I think Fusion FG would be well advised to go from the synthetic fabric to a gi material gusset for better traction in submissions.

The Pants feature 6 rope loops on the front but for some reason also have 3 on the back.  I’m not sure why.

The drawstring has a feature that I’ve never seen before: Fusion FG covered the tip of the rope with sewed on fabric (the same light blue synthetic fabric as the gusset and the trim.)  This feature means that this rope will never fray.  It also looks really cool!

The pants have a small Fusion FG logo hit on the left leg, and a small patch. The only embroidery on these pants is at the bottom of the right pant leg.  It’s a Vulkan scripture. Awesomeness.

Check out the best deals on BJJ gis at Hypnotik

This gi is so comfy and good looking, so rolling in it was always fun.

Honestly, given the thinness of the collar and the lack of a gi material gusset this wouldn’t be my go to competition gi, but then again given the fact that it’s a limited edition collector’s item even if both were on point; I’d still not compete in it.

I think the cool points that the gi gets for being an officially licensed Star Trek product give you an automatic advantage when rolling. 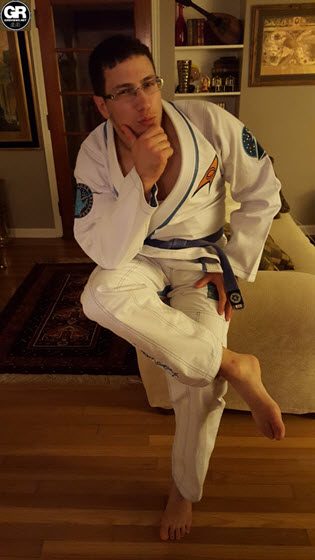 Are you a nerd like me?  Do you enjoy products that are licensed collectors items displaying awesome designs? Stock up on their gear now.  Their products look as amazing in person as they do online.  The Mr. Spock gi was no exception!

Disclosure: This Gi was submitted to me free of charge (by way of gireviews.net) for review.  I have never done any work with or for Fusion FG.