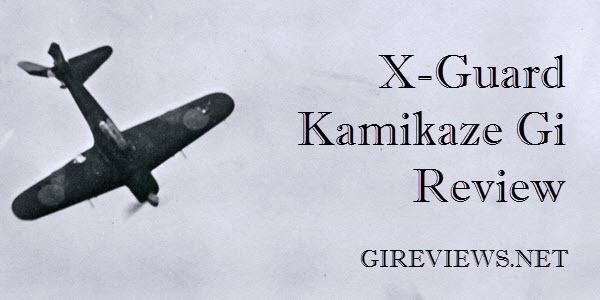 A very solid Kimono in construction and looks

X-Guard is one of those companies that dove right in to every aspect of the Brazilian Jiu Jitsu community as soon as they got in on the market. They pay close attention to their customers and because of that, have been moving more and more Gi's. Folks like Vinny Magalhaes and Rodrigo Teixeira can be seen sporting X-Guard gear. With cool freebies and solid quality, you can't go wrong with an X-Guard Kimono.

My first thoughts out of the bag were that the gi:

Grab the Best Deals on BJJ Gis at MMA Overload

This premium quality kimono was born on the mat, and was designed by a grappler for a grappler. Some features we demand are 8 point loop system trousers, contrast color stitching, tailored fit and feel, Lite-Pearl weave jacket, competition strength 10 oz canvas trousers, double stitched logos and a thick rope drawstring.

In addition this premium quality kimono is a LIMITED EDITION and will never be mass produced.

A very solid pearl weave Kimono in construction and looks.  The XG4 Kamikaze doesn’t bring much, if anything, new to the table, but it is reasonably priced, with nice extra goodies and will take the abuse you throw at it. The Gi has mostly subtle flair that looks clean and contrasts well. I had no issues with bad threading or seams, which were tripled stitched throughout. Of note, the stretchy rope drawstring seemed to have frayed a little bit on one side, but that’s most likely a defect. As a limited edition Gi you won’t be able to get it anymore, but rest assured you will be in good hands if you pick up the XG5 series X-Guard has yet to release.

Unfortunately I washed the Gi before I took initial measurements so a shrinkage comparison would be in vain, however, I can tell you that shrinkage was very very minimal as I couldn’t even tell a difference in the sleeves, pants or skirt length. I even hot washed it with a run in the dryer on medium heat. So it would seem that the Gi stays pretty true to form.

In the range of Gi’s I own I would classify the X-Guard Kamikaze as a middle-weight. It’s not ultra-light or super-heavy, just a nice all around Gi top. It will be able to handle intense sessions on the mat quite easily. It was a tad larger than I like around the body, but that's more likely to me being in-between sizes than anything else.

The red and black contrast nicely but I must say that the white patch on the chest of the black Gi really throws off the sex appeal of the Gi overall to me. Otherwise, in the looks department, the Gi looks great.

The other white patch featuring a kamikaze on the bottom of the skirt has a nice location as to not detract from the overall look of the Gi. The collar was nice and thick, comfortable and sturdy.

During grappling the X-guard jacket did not limit my range of motion in any way and I felt no scratchy interior linings, patches, etc.

The sleeves are slim around the wrist which makes for a nice advantage in grip fighting.

Embroidery is well stitched including the “X” wrapped in a wreath on the sleeves and the Kamikaze Japanese lettering on the back of the Gi looks beautiful.

The skirt sits flush and the overall cut is what I would classify as being “tailored”. The sleeves did seem a little on the shorter side for an A3 compared to the rest of the Gi top.

The pants felt much like any other canvas trousers. There was a bit of excess threading fraying at the belt loops which gave the pants a bit of a “cheap” look too it. A couple of tugs though and I was reassured that the belt loops would suffice in strength. And with 8 belt loops total instead of the usual 6 the drawstring stayed nice and secure without rising above the front of the pants.

The extra knee padding doesn't extend all the way to the ankle, but it hast decent enough range.

The A3 pants were a bit long on my 5’10 frame and I did find the pants much baggier than I am used to. The A2 pants would have been a much wiser choice on my part. O well, that’s the tough life of a short and wide mutant.

One thing that I hear a lot of great feedback on is X-Guards customer service. Most purchases enjoy free T-shirts, Gi-bags and patches.

I personally love having free stuff shoved in my face, so for those out there looking to make the most out of your investment, X-Guard really does have a great bang for the buck. I’m not 100% on their next XG5 gi’s price range but I expect to see it in the $120-140 range, depending on the seller.

Compare prices on the latest BJJ gis from Tatami, Fusion Fight Gear and more at Amazon